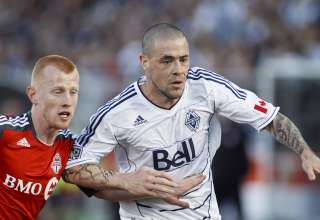 If, next week, the players wearing the red of Toronto FC hoist the Voyageurs’ Cup over their heads, the Vancouver Whitecaps will rue a second half filled with missed opportunities in the opening leg of the Nutrilite Canadian Championships.

The final scoreline on Wednesday read 1-1. But, make no mistake, Vancouver will feel it deserved not just to win the game at Empire Field, but win it handily.

A 64th minute wicked strike from the left foot of Designated Player Eric Hassli gave the Whitecaps a short-lived lead.

But, after some brilliant play by Nick Soolsma, Toronto FC got the equalizer against the run of play. Soolsma was the architect of the goal, juggling the ball on his feet near the right touchline, he turned and beat the sliding challenge of Whitecaps defender Jay DeMerit. His thigh-high cross was deflected inside the post by Maicon Santos.

But, had Vancouver taken advantage of the many chances it created, the Maicon Santos goal should have been a minor consolation, not a key road goal that could be the deciding factor of the final.

Right from the kickoff of the second half, the Whitecaps, desperate to beat TFC in the home leg, went for the throat.

Camilo was sprung into the penalty area thanks to a deft pass from Davide Chiumiento. TFC fullback Adrian Cann came in with a late challenge and came crashing into Chiumiento’s ankles. Not only was Cann flirting with a deserved penalty, he could have incurred a red card for being the last man back and fouling a man in the clear. But referee Silviu Petrescu waved play on.

So, for the Toronto FC faithful still griping about what they felt was an unjust penalty call that went against the Reds in Dallas last week, the non-call by Petrescu was proof that the soccer gods do even things out. That won’t console Whitecaps fans at all.

But, a minute after the Petrescu non-call, Hassli struck the post dead on with a turnaround shot from the top of the penalty area.

On a cross from Chiumiento, DeMerit, sneaking in from his defensive spot to the far post, headed a ball across goal for Camilo to simply nod into goal from less than a yard off the goal line. But Camilo looked to have mistimed his jump and got only air with his attempt to head the ball in.

Camilo then was cursing as his wicked shot was parried off the crossbar by Toronto FC goalkeeper Stefan Frei.

Even before the Hassli goal, a 3-0 scoreline would have been a fair reflection in the gulf in play between the two teams.

But, once TFC got the road goal, coach Aron Winter abandoned a 4-3-3 that wasn’t working —and packed five men on the backline to hang on for a very good road result.

The opening 20 minutes saw the two teams play a very open game; there was acres of space in the midfield for both sides to exploit. But, despite the back-and-forth attacking from both sides, neither could muster a quality chance.

Still, there were some fascinating battles to watch — the best of which saw speedy Whitecaps winger Shea Salinas running up and down the right side, giving Toronto FC fullback Dan Gargan fits. Salinas looked to have got behind Gargan a couple of times early in the game, but passes that were supposed to set him free were slowed down by the slow artificial turf, which had more rubber added to it recently.

In the 29th minute Camilo took the ball on the left from Chiumiento, outran Dicoy Williams across the box, and got a great effort off towards the near post that Frei did well to get down and stop.

Toronto FC’s best chance of the half came right before the ref sent the teams to the dressing rooms. After TFC survived a period of Whitecaps’ pressure, the ball was sent up the right wing for Nick Soolsma, who turned Whitecaps’ defender Alain Rochat, sprinted up the wing, and got off a wicked shot on goal that Vancouver keeper Jay Nolly needed to dive to get to.

Jacob Peterson limped off the pitch after 30 minutes, and Winter needed to bring in Matt Gold to replace him in midfield. Later in the first half, Tony Tchani fell awkwardly to the turf He made it to halftime, but needed to come out in favour of Oscar Cordon. So, in the first 45 minutes, Winter was forced to burn two of his three subs.

Toronto goes home knowing all it needs to do is go home and hold Vancouver off the scoresheet, and a date with either Real Esteli or Walter Ferreti awaits in the qualifying round of the CONCACAF Champions League.

One big advantage for Vancouver; Toronto FC has to go to Colorado this weekend, into the energy-draining altitude of the Denver suburbs. Meanwhile, the Whitecaps have a bye this weekend in MLS. So, Teitur Thordarson’s men will have a week to prepare for next Wednesday’s second leg, while the Reds will need to catch their breath after a Sunday date at high altitude.