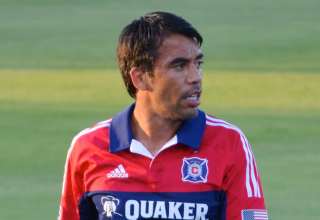 One free kick made the difference on Saturday, as the Vancouver Whitecaps ended a streak of five consecutive games on the road with a second straight loss, this time to the Chicago Fire 1-0.

Ten minutes in, the Fire scored its first goal in three games, as Pavel Pardo curled a pinpoint free kick over the Vancouver wall and into the top left corner past a helpless Joe Cannon.

For the Whitecaps, the defeat means the club ends its road trip with a record of 1-3-1, ahead of playing defending MLS Cup champions LA Galaxy on Wednesday at BC Place.

Still, head coach Martin Rennie felt it wasn’t a lack of effort or tiredness that led to the result.

“I was incredibly impressed with the legs we showed,” Rennie said. “Obviously we started the game slower than we would have liked. It was a great free kick — it was executed perfectly. But we responded very well from there and I thought the effort and energy we showed after that was actually mind-blowing at times given the number of games we’ve just played and the amount of travel we’ve just done.

“I wouldn’t say there was any lack of energy there — in fact there was way more energy than I thought we had. So, I’m actually really proud of the players tonight. Obviously disappointed not to get a point or a win but I really believe we deserved a lot more out of that game tonight.”

Regardless of the coach’s perception of his team’s effort and performance, Vancouver rarely threatened the Fire goal, getting its only real chance with a late header from Eric Hassli, a play in which the player appeared to land awkwardly on his ankle.

The Vancouver attack seemed to lack cohesion at times, perhaps as a result of a first start for Michael Nanchoff down the left, and another match for the apparently still rusty Barry Robson, who missed several attempts on goal and appeared visibly frustrated with his own performance and the play of his teammates on a number of occasions.

The match also saw the debut of Dane Richards, the winger Vancouver acquired from the New York Red Bulls on Friday in exchange for Sebastien Le Toux. The Jamaican came on as a half-time substitute for Alain Rochat and, while he showed glimpses of his ability to beat players with pace, didn’t seem to have instant chemistry with his new teammates.

“Anybody who comes into a situation like that needs an adjustment period,” Nanchoff said of the new additions. “But I think they’ll adjust quickly because that’s the type of players they are and the personalities they have. That’s why it’s so important now we’re able to go back home, play in front of our home crowd, play on our home turf or practices. We’re definitely looking forward to that.”

The Whitecaps now prepare for a match against the Galaxy on Wednesday, where it’s expected David Beckham will make his first competitive MLS appearance in Vancouver. Saturday’s loss to Chicago also marks the Whitecaps’ final away match to an Eastern Conference team, meaning a lot more local travel rather than cross-continent flights in the final half of the season.

“It’s a fantastic feeling,” Nanchoff said. “It’s only my second year in the professional ranks but it’s almost mind boggling how these guys do it for so long with the travel. It’s something for a young player to get used to it, but with some big personalities to look up to on the team it makes it a lot easier, that’s for sure.”