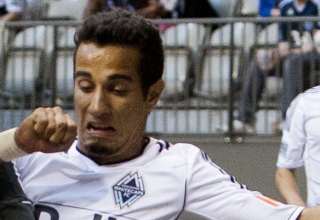 The Vancouver Whitecaps put an end to a seven-game winless streak Wednesday night at BC Place in front of 17,777, defeating Chivas USA 4-0.

Gershon Koffie, Dane Richards, Camilo and Barry Robson all found the back of the net against the worst side in the Western Conference, despite the club finding itself on the wrong side of the possession statistics, holding only 32.3 per cent of the ball.

“It was a crucially important game for us,” head coach Martin Rennie told reporters following the match. “All the players knew that and responded well to that little bit of pressure, which you have to be able to play under if you’re going to be successful.”

The home side started strong, taking the lead just 11 minutes into the match, as Gershon Koffie made a late run into the box to smash home a pass from Kenny Miller.

“It helps when you get an early goal, and it’s fun when you win and score goals,” captain Jay DeMerit said. “When guys are taking responsibility for their jobs, then you can sit back and enjoy it, because that’s what we’re here to do – we’re here to enjoy it.

“We haven’t been enjoying it lately. Sometimes it’s a grind. Sometimes you got to do what you don’t want to do to win games, but I think it all came together tonight and now that has to continue.”

The play was not without cost though, as Miller pulled up with a hamstring injury. He attempted to play through it, but requested a substitution after finding he couldn’t run the injury off.

In came Richards, and the Jamaican caused the Chivas backline fits – forcing Dan Kennedy into a diving save 25 minutes in, before scoring the second goal of the match 10 minutes later after a clever one-two play with Camilo on the right wing.

Richards cracked his effort across goal, nestling his shot in the bottom left corner to double Vancouver’s lead.

Miller’s injury meant Vancouver was forced to make a first-half substitution for the third time in two matches after Darren Mattocks and John Thorrington both pulled up with hamstring problems against the Seattle Sounders on Saturday.

“It’s disappointing,” Rennie said. “The last couple of games have seen us have to make changes in the first half, but once again, the player coming on did very well. Dane Richards had a significant impact on the game, and with his pace, he was probably the last player they wanted to see.”

Vancouver continued their offense after the break, as Camilo scored his first goal since Aug. 11 against Real Salt Lake, providing instant redemption for his last-gasp miss in Saturday’s scoreless draw.

“The last game against Seattle — I lost one goal chance,” Camilo said. “I trained very hard this week, so I’m very happy.”

The Brazilian celebrated his effort by emulating the “Gangnam Style” dance by South Korean rapper Psy, which has gone viral on YouTube.

“Today I looked at the video, and I said, if I score, I’ll dance this,” Camilo said. The striker acknowledged there was no input from Lee Young Pyo, the club’s South Korean defender. “No, no — Y.P. is a shy guy!”

Robson capped off the game by scoring a powerful left-footed shot on the half-volley after Camilo kicked a ball through John Valencia’s legs, ran to the touchline and crossed into the area.

The result flips the mindset of being on a seven-game winless streak to a three-game unbeaten run, the Scottish midfielder suggested.

“That’s five points from the last three games,” Robson said. “We feel good. We’ve got a game against Portland [Timbers] – they’re a good side and it’s a derby. It’s going to be a tough game, but we’re ready for it and hopefully we can get another win and hopefully that should secure it for us.”

The ‘Caps, having improved to 11-12-9, must wait a couple of weeks to play the Timbers, with that match taking place at home on October 21.