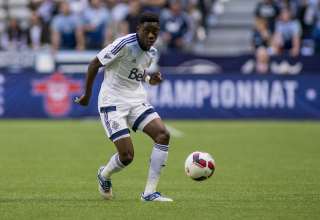 Outside of some very entertaining and competitive matches in the Amway Canadian Championship, the Vancouver Whitecaps and FC Edmonton have had a very amicable relationship. In the past, the Whitecaps have loaned players to its closest NASL neighbour — Corey Hertzog and Carlyle Mitchell come to mind.

On Tuesday, the Whitecaps announced a new partnership with the Alberta Soccer Association that will include an academy located in Calgary. But it needs to be stated that, before this deal was stamped, both the ASA and the Whitecaps informed FC Edmonton of their intentions — and FCE gave the plan its support.

So, the positive relationship between the ‘Caps and Eddies remains in place.

Alberta has provided a steady share of players to the Whitecaps. At the moment, no one is garnering more attention than Edmonton’s Alphonso Davies, who made his MLS debut at 15 years of age. Davies came out of an Edmonton program called Free Footie, which provides free soccer for high-needs kids whose families can’t afford to register their kids in leagues. It’s become a place where refugee children learn to connect with their new Canadian surroundings. This year, Free Footie will provide soccer for more than 2,000 Edmonton kids.

To rise from Free Footie to the Whitecaps is an incredible tale.

But the Whitecaps also have other Albertans on their first-team roster, including goalie Marco Carducci and fullback Sam Adekugbe, currently out on loan to Brighton and Hove Albion.

“The Whitecaps FC brand brings tremendous respect to all involved in the game,” said Shaun Lowther, the ASA’s technical director, in a release issued by the Whitecaps. “Now, more than ever, it is essential that organizations such as Whitecaps FC and the Alberta Soccer Association work together for the betterment of the game.”

As well, it should be noted that one of the challenges for FCE’s own academy program is the difficulty in finding the right kind of competition for the club’s prospects. Now, having a Whitecaps academy just down the Queen Elizabeth II highway could open some competitive options.