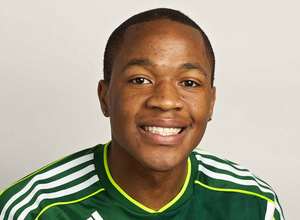 Goals from Franck Songo’o and Darlington Nagbe gave the Portland Timbers a 2-1 victory Saturday night over their Cascadia rivals at JELD-WEN Field in front of 20,438 fans.

Nagbe got things started for the Timbers with his 41st minute goal, linking up with Timbers captain Jack Jewsbury and Eric Alexander before lifting the ball over Joe Cannon from close range to fire the home side into the lead, in what was the attacker’s third goal in as many games.

The Whitecaps had an almost immediate answer, however, as Designated Player Kenny Miller scored his first goal for his new club in first-half stoppage time. The Scotsman got on the end of a ball from Jay DeMerit before taking a touch and hammering home from close range unmarked. The goal came in the second phase of a corner which the Timbers seemed adamant should have been awarded as a goal kick.

The winning moment came on 55 minutes, as Songo’o’s curling free kick effort went straight past Cannon into the left corner of the goal, hitting the turf before bouncing underneath the Bay Area native. Cannon did well to get across his goal, but seemed to misjudge the flight of the ball to concede a goal that will be seen as a goalkeeping error.

Cannon wasn’t alone in making mistakes, however, as the team struggled to find much in the way of fluid possession and were largely outplayed by the Timbers in midfield which kept 53 per cent of possession throughout the match.

“It was one of those games were there were just so many poor performances and so many mistakes,” head coach Martin Rennie said after the match. “Even the [Songo’o] goal was a mistake and there were just mistakes happening all over the field, so that was disappointing. Obviously we’re in a tough little run at the moment. The last couple of games haven’t been to the standard we would have expected and neither was this game. We have to dig deep right now and find more strength to bounce back.”

Despite the performance, the ‘Caps did create chances – perhaps the best of which came in the 74th minute as Camilo latched onto a rebound generated by a Dane Richards attempt on target. The Brazilian’s effort directed at a seemingly empty goal was thwarted by a leaping header from defender Steven Smith to preserve Portland’s lead.

Three minutes later Barry Robson got on the ball just past the halfway line, carrying it to the edge of the area before unleashing a stinging effort. Ricketts struggled to make the save, missing the ball with his hands, but the spinning effort struck his body before going out for a corner kick.

In a bid to get his side back in the match, Rennie brought on Darren Mattocks for the final 20 minutes, but the rookie raised his arms while going up for a challenge with David Horst, appearing to make contact with the defender’s head with six minutes remaining in the match. After consulting with his linesman, referee David Gantar gave Mattocks a straight red for the challenge, meaning Vancouver played out the final moments a man down.

“He has had some issues with getting yellow cards and red cards now,” Rennie said. “The way that he challenges is something that we have talked about a lot and he hasn’t been able to learn from it. Now it’s a painful moment where maybe he will learn from it because for him to improve he can’t be getting sent off. You always back your players and I think Darren’s a fantastic player with a bright future but this is something that he has to clean up.”

The Whitecaps, now 10-10-7, return to action on Sept. 1 against the LA Galaxy at the Home Depot Center.