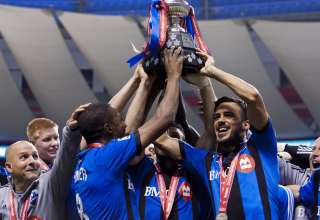 The Montreal Impact is Canadian champion for the eighth time – hoisting the Voyageurs Cup on enemy territory.

On Wednesday night, the Quebec-based club travelled to the West Coast and, with a 2-2 away draw to the Vancouver Whitecaps at BC Place in front of 18,183, ensured it will represent Canada in the 2013/14 CONCACAF Champions League.

Entering Wednesday’s second leg scoreless on aggregate, the 2-2 draw away from Stade Saputo meant Montreal won the two-leg tie due to the away goals rule.

Hassoun Camara played hero with an 84th minute header from a corner to score the decisive marker, adding to Felipe’s 49th minute effort from outside the area.

That cancelled out Whitecaps goals from Camilo – who scored a wonderful long-range free kick from 35 yards four minutes in – and Daigo Kobayashi, who came off the bench to bang home a garbage goal in the 69th minute.

“It’s an honour, I’m proud because I’m in Canada and when you win the cup in Canada it’s nice,” Impact coach Marco Schallibaum said after the match. “I think it doesn’t only matter for me but for the players. We’ve all worked really hard together and with the result today we won the cup and I’m very proud.”

In order to win the cup, the Impact twice had to come from behind and do so away from home, where the Whitecaps are unbeaten in all competitions this season.

“That’s a reason why I love this team,” Schallibaum said. “They never give up, they have a lot of energy and we know we can always score at any time like tonight. This is why we are very good together. It’s important to have this mentality to the end to believe, to believe that we can win and make this 2-2.”

As for the Whitecaps, they were adamant that centre back Andy O’Brien was blocked illegally on the tie-winning play. Head coach Martin Rennie brought it up in his post-match press conference and then goalkeeper Brad Knighton reiterated that point.

“I think Andy got picked,” Knighton said. “Camara is going to make that 99 per cent of the time – it’s unfortunate, because without the block Andy had 20 seconds before that, sprinting 40 yards and sliding in and knocking it out for a corner – it was fantastic.

“I just talked to him [in the locker room] and he was saying, ‘that’s the highs and lows of football.’ But it’s not all on him.”

With this latest cup failure, the Whitecaps are now winless from their 12 Voyageurs Cup attempts. The competition in its various forms has been somewhat of a curse and that appeared to continue on this night.

“It’s not the first hard-luck story that the club’s had in this competition,” Rennie said. “That’s why it means so much to us because we know the agonies that the fans have been through for many, many years.

“Most of us haven’t been through all of that but we’re very well aware of it. We wanted to put that right tonight and it did seem like we didn’t almost everything right but it didn’t quite drop for us.”

Both teams will resume league play this weekend, with the Impact playing Sporting Kansas City on the road and the Whitecaps travelling to New Jersey to play the New York Red Bulls.

But the hurt will last a while for the Whitecaps – especially given the decisive goal came from a set piece – a bit of an Achilles heel for this squad.

“People need to pay attention to the stuff we’re going over in training,” Knighton said. “We go over that stuff day in, day out, and it comes down to us executing that on the field. They put up charts, they give us video footage, but ultimately it’s you versus the man across from you on set pieces and ultimately it’s not good enough right now.