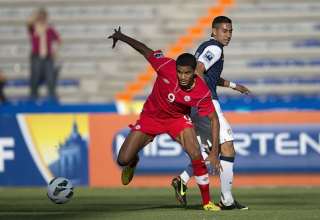 Caleb Clarke in action against the United States at the CONCACAF U-20 Championship. PHOTO: MexSPORT/Canada Soccer

The Caleb Clarke-to-FC Edmonton talk can now be laid to rest.

The Vancouver Whitecaps confirmed Wednesday that the Canadian striker will go on a year-long loan to German side FC Augsburg.

“This is a great opportunity for Caleb to continue his development and we look forward to seeing the progress he’ll make,” said Whitecaps’ coach Martin Rennie in a release issued by the club.

Clarke, who scored twice for Canada against Nicaragua in this year’s CONCACAF U-20 Championships, has been dangled as a loan prospect all season long. In the spring, sources indicated that Clarke was close to a deal that would have sent him to FC Edmonton, but a deal fell apart right before the NASL season began. And, as FC Edmonton has discussed bringing in domestic (as in Canadian or American) strikers from MLS clubs in time for the fall season, Clarke’s name had been bandied about again.

But the forward has been in Europe on trials, including a previous stint at Augsburg. He also got a look-see from Feyenoord.