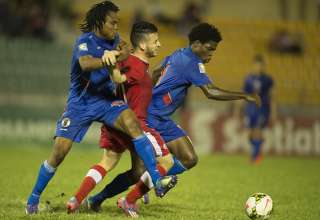 Marco Bustos finds himself in a jam. PHOTO: CANADA SOCCER/MEXSPORT

There’s always something spectacularly bizarre about watching a Canadian national-team game stream from the fine folks at CONCACAF.

Canada had a very on-and-off performance Saturday in a 3-1 win over Haiti in their CONCACAF U-20 Championship group-stage opener. But, as coach Rob Gale predicted when he spoke to journalists on Friday, the squad featured a few notable hold-backs, as the team has to face Mexico within 48 hours. Cyle Larin, predicted to be the No. 1 pick in the upcoming MLS Superdraft, came in only as a 70th minute sub right after Michael Petrasso buried the penalty kick to give Canada its third goal of the match. Hanson Boakai, the FC Edmonton wunderkind who has been nursing an injury, didn’t see the field.

But, for some reason, a CONCACAF technical staff member was asked to take a microphone and do a play-by-play to the best of her abilities. So, as the game went on, all we could hear was numbers being read out “Number 5, to number 7, to number 9…” It was like SPECTRE had taken over the game. And, near the end of the game, she asked someone named László for direction, on how Canadians could access the feed.

Jordan Hamilton’s quick brace gave Canada an early cushion. He poked his first goal through the legs of keeper Ramos Pointe Jour, then got his second after he headed home a cross from fullback Sam Adekugbe, who got his Canadian citizenship just before the tournament began.

But, just as Canada was beginning to look comfortable, some disturbing trends appeared in the game. The four defenders were often left isolated as the central midfielders didn’t track back to make themselves available for outlet passes. The lack of cohesion between midfield and defence forced the centre backs and fullbacks to spray long, hopeful balls up the wings — and led to a slew of giveaways.

And, Haitian forward Jonel Desire headed into an empty net after Canadian keeper Marco Carducci fumbled his attempt to corral what was a basic hit-and-hope lofted free kick.

Marco Bustos hit the crossbar with a chip and Michael Petrasso missed a sitter; so Canada’s poor play in midfield was compounded by errors up front. At the half, a game that should have been a blowout was only at 2-1.

Midfielder Jeremy Gagnon-Lapare was sacrificed at halftime, with Manny Aparicio taking his place. But there wasn’t a significant improvement in midfield play. But, with Haiti producing little in terms of attack, Canada could keep committing players forward, and the game was finally salted away with the Petrasso penalty.

With Canada up 3-1, Hamilton could have had his hat trick; he got into the box with only the keeper to beat. He pushed the ball past Pointe Jour, only to be taken out by a two-footed challenge. It should have been an easy case of penalty kick and red card. But, instead, Hamilton was on the turf as play went on, and Pointe Jour got away with it.

Despite a scoreline that wasn’t as decisive as Canadian fans might have hoped, Larin will be pretty well rested ahead of the big Monday date with Mexico. But the Mexicans scored nine against Cuba on Saturday; if Canada’s midfield play doesn’t improve, then Larin might have to score a bunch to keep it close.

So says László. OK, not really.