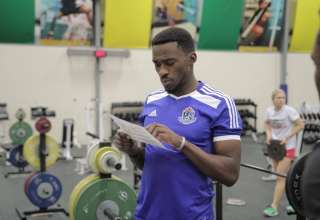 Usually, part of the pre-season ritual is coming to training sessions and asking the staff to tell you who the new guy is. We get great stories about young players from small countries looking to find their ways into NASL, or the tale of a journeyman looking for one last contract. We see a player whose name we sorta remember from a few years ago. We see a player trying to rebuild a promising career after a rough patch.

Sometimes, the trialists turn out to be diamonds in the rough. But most of the time, they’re sent packing.

But, this year, FCE has no trialists on hand. And, no plans are in place to bring in any. Everyone at Wednesday’s training session at Commonwealth Fieldhouse knows they will be Eddies this season. They know they’ll be going to Scotland for the team’s March preseason tour.

“Year one , there were trialists, when I was here,” said FCE coach Colin Miller. “And since then, it’s been players who have been signed. It was an absolute gong show year one, the club lost an absolute fortune in flights and hotels and all that stuff. So we decided, no, we’ll do our own research, our own work. Not every player works out, but that’s the same as any level of football. There’s always an amount of risk. We’ve done a lot of work with players in the off-season who we have brought in, and we’re delighted with the impact they’ve made.”

It’s a good point: Often, the public sees trialists as no-risk options. After all, they’re not on contract, are they? But the team pays out money to bring them in and put them up while they’re on their trials. And that does affect the bottom line. There is risk. And, it’s a gamble that often doesn’t pay out very big.

“Trialists are a part of the game. When people come in, it’s not really a distraction, but I think it’s better from a team aspect when everyone is here is going to be here. In terms of team bonding, of gelling together, everyone’s on the same page. You know that the players you’re going to see here are going to here for the season. So it’s not a case of getting used to someone during preseason and the next week, they’re gone. In that aspect, I think it’s great that we have pretty much our full team here together and we get to build and grow together.”

Returning striker Tomi Ameobi says it’s unusual to be in a trialist-less camp.

“It definitely makes it a lot easier. It just makes things a lot more cohesive. You know from the beginning that everyone here is going to be part of the team all season. So you can hit the ground running.

Of course, the lack of trialists make it harder to get the rumour mill going. Damn this certainty!