May 18, 2022
9 New Articles
Home NASL & USL FC Edmonton What the hell, Edmonton? What do the Eddies have to do to win you over? 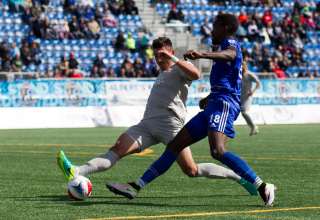 Too many empty seats for a top-of-the-table team. PHOTO: TONY LEWIS/FC EDMONTON

(Last night, I went on a tirade on Dean Millard’s show on TSN1260 and discussed the very topic you’ll read about below. The sound file for that can be found here.)

Last Sunday, FC Edmonton went for its 10th home win in a row — a quest to tie a league record. So, for sure, Clarke Field was packed to see a winning team continue its remarkable streak, correct? After all, everyone loves a winner.

Only once this year have the Eddies recorded an attendance of more than 3,000. That came in the final game of the spring season, against the Fort Lauderdale Strikers. And the Eddies are tied for the fall-season standings lead. They’re one point off the overall table lead, and FCE has a game in hand.

If there weren’t other more pressing issues in NASL this year — Minnesota moving to MLS, Fort Lauderdale players missing cheques earlier in the year and Rayo OKC’s ownership dispute leading to one of the partners removing half of the team’s turf tiles from the stadium — the “why doesn’t Edmonton support a winner?” question would be a lot louder around the league.

But it’s time to ask this of you, Edmonton — and, more specifically, of Edmonton’s soccer community. What do the Eddies have to do to make you love them? Clearly, winning isn’t enough.

This is the year where the excuses don’t work. You can’t say “the team isn’t competitive enough.” You can’t say that you’re sick of seeing a losing product. The Eddies are at the top of the league. If fans can’t support a team that’s a winner, what does that say to owners Tom and Dave Fath? What does it say about Edmonton as a “city of champions?” It speaks a lot more loudly than poor attendances where the team is down in the standings, that’s for sure.

Maybe it’s a good thing City Council voted to take down the City of Champions signs.

Sure, FC Edmonton has has bad luck with the weather; there have been thunderstorms in the summer and some blustery days in the spring season. But weather only disrupts walk-up ticket sales. It shouldn’t bring down season- and advance-ticket sales. And no team can depend on walk-up sales — they should only make up a small percentage of the gate. The excitement and demand need to be created so that Edmonton sports fans see the need to buy their tickets well in advance.

Yes, selling summer games in Alberta is tough. With our short summer season, we spend our weekends in the mountains or at the lake or at our buddies’ weddings. Edmonton is arguably the best festival city in the country — so Eddies games have gone head to head against a number of massive-draw events in the city, from the multicultural Heritage Days to theatre’s Fringe Festival. The Eddies have traditionally done better at the gate in the autumn, when the kids are back in school and festival season slows down, than in the summer.

But, at some point, the excuses have to stop. The Eddies want to be in a larger venue; they also want to become the primary tenant at Clarke Field. But when a 4,500-seat stadium is half full to see a team that hasn’t lost a home game since April, what kind of message does that send to Edmonton Mayor Don Iveson and his council?

There should be absolutely no need to do the kind of “support local soccer” campaign people to shame people to support a club because it’s, well, the team down the street. People should want to see a winning product without any sort of guilt-laden marketing attached.

Don’t think the venue, is easy to get to? The LRT stop is across the street. Supporters groups arrange buses. There’s a shuttle to help fans get to games. And, heck, the traffic on Stadium Road on a Sunday, well it’s not bad. Is is the most gorgeous soccer stadium in the world? No. But you make it work; it’s not like every soccer club in Europe plays in a palace.

Right now, there’s more media coverage of the Eddies than at any other time in the club’s history. The stories are fantastic; you have a Northern Irish captain who is looking to make Canada the permanent home for himself and his family. His close friend is the team’s all-time leading scorer. A Canadian teenager is starting every game in midfield, alongside a Canadian national-team regular. You have a goalie that is putting together a season that could rewrite the NASL’s history book.

There really shouldn’t be an excuse left in this city for one blue empty chair at Clarke Field.

The Eddies have a wonderful core of die-hard supporters. But, if this team is to achieve its goal — to eventually get into a venue that can occupy 8,000-9,000 fans, a number which Tom Fath has said in the past represents a break-even mark — it needs to be able to sell out Clarke Field on a regular basis. And, if a team at the top of the standings doesn’t fill a 4,500 seat venue, what does it say about filling a dreamed-of 8,000-seat venue down the road?

Look, I know Edmonton has a history of being a great sports town. The Oilers sell out games despite not being an NHL playoff team for a decade. Eskimos attendance numbers are still the envy of the CFL. And Edmonton does very well to support many one-off events. I was at a standing-room-only Foote Field on a thunderstorm-threatened Saturday night to watch Andre De Grasse run the 100 metres in the national trials.

This isn’t a question about not enough of the population liking soccer. That would be the case if FCE was trying to fill 50,000 seats at Commonwealth Stadium across the street. But we’re talking about 4,500-seat Clarke Field, here. Those involved with Edmonton’s youth, men’s and women’s soccer leagues should be able to fill that stadium three times over. Without having to win over one casual fan, the first-place Eddies should be able to fill one of the smallest stadiums in NASL, just based on the soccer community alone.

But I’ve heard it when I speak to so-called soccer fans in their Barcelona shirts and Arsenal shirts and United shirts and Portuguese national-team shirts. It’s not big-league. It’s not as good as the leagues in Europe. So, tell me, does “not being the NHL” stop Russian fans from going to KHL games or Finnish fans from seeing their hockey teams? Do Serbs and Croats and Greek basketball fans shun their local teams because “it’s not the NBA?” No. For people who want to be just like Europe, not supporting your local team is about the most non-European thing you can do. And, of course, many European fans support their lower-division sides despite the fact that the big stars might be only a short distance away.

Maybe, truth is, you like the stardom that surrounds soccer more than soccer.

FCE needs more corporate ticket buyers. It needs more moms and dads taking their kids out to games. It needs more people who want to chant in the supporters section. The team has put the product on the field. Edmonton, you’ve run out of excuses.