May 18, 2022
9 New Articles
Home Canadian Soccer The Association What is bio-banding, and can it help level the playing field for kids in soccer? 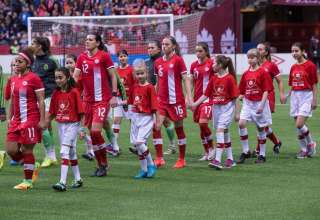 Proponents of bio-banding include the English Premier League, which is now regularly backing soccer festivals that highlight players who may have previously been ignored by scouts and academies because of their birthdates. Kids who are born late in the year often have sporting disadvantages compared to kids who are born in January or February. FIFA determines eligibility for its youth tournaments by the calendar year, so a 16-year-old with a January 1 birthdate has a huge physical advantage at an U-17 World Cup over a kid who was born in December of the same year.

The late kids are smaller, and when you’re 12 years old, being a few months younger than some of the other kids is a big deal in terms of development.

What bio-banding aims to do is to put kids together by ability and size, not age. The thinking is that the system will offer more shots to kids born late in the year, or the late bloomers who take a year or two more to elevate their games.

For now, Saskatoon Youth Soccer is only going to look at bio-banding on a small, case-by-case basis.

“We are using bio-banding principles to review a very small number of cases in regards to late maturational development,” said Saskatoon Youth Soccer’s Youth Program Coordinator, Aaron Wright in an e-mail. “For example; this would allow a 15-year-old to play with 13-year-olds if they apply to play down, meet the principles outlined in bio-banding by our expert, Adam Baxter-Jones, and also receive a majority vote in favour from a panel of our five technical directors.

“We are not sure yet the effects this will have on tournaments, etc., as we will review that this year with the two or three players that have been approved. However, to be clear, SYSI is not going to all bio-banding league; just using the principles to help with a very small number of cases in late maturational development.”

What’s interesting is how few late-month-birthday players are on the rosters of the three Canadian MLS sides. While this is a very small sample size, the rosters of these three teams do offer some evidence that, if you want to play pro soccer, your chances drop if you’re born in November or December.

On Toronto FC’s 29-man roster, only three players have birthdates after August, and none have December birthdates.

Of the 34 men listed on the Whitecaps roster — including those out on loan —11 were born in either January or February. Basically, those two months account for a third of the roster. And, 22 of the 34 players were born before July 31.

The Montreal Impact has 29 players on its roster. Eighteen were born before the end of the August.

In women’s soccer, the gap is even more pronounced. Canada Soccer currently lists 19 players on its women’s national team. Of those, only one has a November birthdate. How many have December birthdates? That’s right — zero.

Even from this small sample size, we can see that — at least in Canada — it’s very hard for a kid born in November and December to realize his or her soccer dreams. Is bio-banding a solution for this? Time will tell; but there’s a very good chance that we’re missing out on players who could have grown to be special players — if only their birthdates weren’t holding them back.