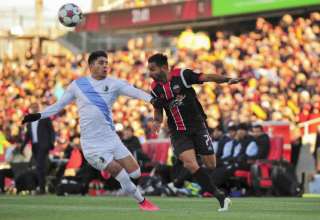 The short-term gain was clear.

The Ottawa Fury was better equipped to last through 120 minutes (plus added time) of soccer, outlasting Minnesota United FC 2-1 in an epic NASL semifinal. Tom Heinemann, after taking an early yellow card, got the equalizer right after halftime, then stroked home the winner in the second half of stoppage time. Romuald Peiser, the NASL’s best keeper, made a couple of wonderful stops to preserve the lead.

Think back the last week of the regular season; Fury coach Marc Dos Santos surprised a lot of people by deciding to rest many of the regulars at his disposal. The Fury had to settle for a 1-1 draw with Atlanta in the final game of the season, which cost the team the No. 1 seed. That seed went to the New York Cosmos.

It’s easy to argue that, so far, it’s worked out for Ottawa. The team was rested and was ready to handle the rigours of a playoff game that lasted well past 90 minutes.

It’s also a lot cheaper to host league events in Ottawa than in New York; our weak loonie helps. In New York, despite Raul and Marcos Senna and another top-of-the-table season, empty seats have been the topic of discussion. Sure, there are many excuses and conspiracy theories about Cosmos attendance to fuel an entire History Channel miniseries; that it’s too difficult to get either out of Hofstra University or Coney Island, that another league has tried its best to bully the Cosmos. But, none of these arguments change the fact that we’re expecting to see a Soccer Bowl final in a stadium with lots of empty seats. It will be a game met with a lot of indifference in a crowded New York sports market.

The Cosmos drew just 5,061 to Coney Island for its semifinal win; that’s just a little more than half of what the Fury drew to TD Place.

A game in Ottawa would have been front-page news, especially with the RedBlacks not playing next week because they earned a bye to the second round of the CFL playoffs.

As well, playing the Soccer Bowl at home would have saved the Fury tens of thousands worth of travel costs. Last time I checked, New York, even out in the ‘burbs, doesn’t offer the best in hotel deals.

Sure, I understand that Atlanta fans will feel that this column disrespects the Silverbacks. There’s no guarantee that Ottawa would have bagged three points if Dos Santos went with his “A” lineup in the final game of the regular season. For sure, suggesting three points would have been automatic is not fair to Atlanta coach Gary Smith and his crew. But, the point is, shouldn’t the Fury have fielded the best possible to lineup to go for that possible three points – and the No. 1 seed?

And, had Ottawa got the No. 1 seed, it would have faced the Fort Lauderdale Strikers. I’ve already sorta offended Atlanta fans, so now I’ll tick off another set of supporters in this league. The Strikers aren’t Minnesota United. There’s a big gulf between the No 3 and No. 4 seeds in NASL. The Strikers lost to New York yesterday and they would have been longshots in the Ottawa cold. So, I’d feel pretty good that the Fury would also have advanced had it played the Strikers rather than Minnesota.

I’m sure there will be a reader or two who will note that, in the past, I’ve suggested that winning the MLS Supporters’ Shield is pointless. So why the change in heart when it comes to finishing first in NASL?

Well, statistics show that Supporters’ Shield/MLS Cup winners are rare — it has only happened twice since 2003. And that’s because, through most of the conference playoffs, the series are determined through home-and-away aggregate series. The lower seed gets a home game, the higher seeds get a home game. History has shown us that it really even things out.

In the NASL playoffs, it’s a one-and-done scenario. There are no aggregate series. So, the ability to snatch a top seed and manage your match-ups and claim home field advantage is huge.

And, after the Soccer Bowl, we’ll fully be able to determine if Ottawa not going for the No. 1 seed will end up being a minor footnote to the season, or a major story.