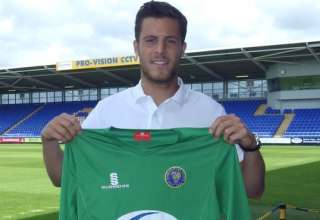 Jayson Leutwiler is going to play for Canada!

Leutwiler is the starting keeper at Shrewsbury Town (already 18 appearances this season, league and cup competitions combined). Last season, he made 37 appearances for the club after moving to Shewsbury Town from Middlesbrough.

He’s so new to Canada, that the Shrewsbury Town site still has him listed as a Swiss international. But that club announced Wednesday that Leutwiler will play for Canada in its Nov. 11 friendly at South Korea.

Leutwiler has played for Switzerland at various youth levels. Three times he played for the Swiss U-20 team, all in friendlies against Italy. Now that he’s decided to play for Canada, the Swiss don’t have a special keeper ready for when they have to face the Italians.

Leutwiler’s mom is from Canada.

The process to get Leutwiler to move from the Swiss program to the Canadian program began a year ago, so some credit has to go to Benito Floro, who was not brought back to be the men’s national team’s head coach after it failed to qualify for CONCACAF’s Hex.

“It has been a long process. I think Canada contacted me almost a year ago and we had to make the transfer from Switzerland to Canada for the paperwork and now it’s done and I’m very happy.

“It’s going to be an amazing experience and I’m really going to try my best there and just enjoy the moment as well.”

“International call-ups are always good for any player, no matter which country. So it definitely takes me to another step and I hope it will help me for the rest of the season as well.”

Leutwiler was in goal for Shrewsbury in February when it faced Manchester United in the FA Cup, and lost by a 3-0 count.