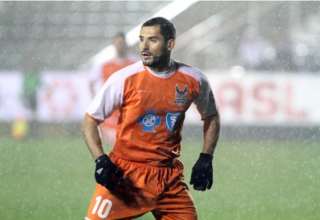 Etienne Barbara was freed of his commitment to join FC Edmonton — and now the 2011 NASL MVP will join the rival Minnesota Stars.

Also joining the Stars is 2012 NASL MVP Pablo Campos, who led the San Antonio Scorpions to a regular-season title. The Stars have also finally confirmed the signing of midfielder Bryan Arguez, who spent the last half of the 2012 NASL season with FCE, on loan from the Montreal Impact. The Eddies had publicly stated their desire to get Arguez on a permanent deal. The Stars loaded up, also nabbing former Scorpion and Puerto Rico Islander Aaron Pitchkolan and Daryl Sattler, the top NASL keeper of 2012.

As teammates in Carolina back in 2011, Campos and Barbara paired to create one of the greatest offensive juggernauts second-division soccer in North America has ever seen. Barbara scored 20 and Campos scored 15.

Barbara rejoined Carolina coach Martin Rennie with the MLS Vancouver Whitecaps in 2012, but spent most of an injury-riddled season on the sidelines. FCE stepped in with what sources reported was a lucrative offer, and Barbara signed a letter of intent to join the Eddies, who were the league’s lowest-scoring squad in 2011.

But, due to personal reasons, Barbara asked the Eddies to reconsider — and the club agreed to tear up the letter.

“Due to certain personal issues, we have decided to allow Etienne Barbara to pursue other options,” said FCE Director of Soccer Operations Joe Petrone in December (CLICK HERE FOR THE FULL STORY).

Now, the Flyover Cup is sure to be a lot more interesting. Barbara wasn’t a popular figure in Edmonton in 2011, as the RailHawks and Eddies had some heated, card-filled matches. Now, after spurning Edmonton for Minnesota, Barbara will be the Edmonton Supporters’ Group’s Public Enemy No. 1.

FCE hosts Minnesota in its final home game of the 2013 spring season — June 28.