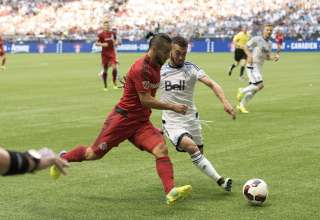 Going forward, there will be ways for Canadians to become domestics league-wide in MLS, but it might be almost as difficult as it is to satisfy all the parameters to becoming a free agent in MLS.

On Wednesday, MLS and Canada Soccer announced a series of initiatives to aid the game in this country, including a joint task force on how to improve youth development in this country, and creating a new Generation Adidas Canada program. Under GAC, top Canadian prospects will be identified and signed so they can be made available to all MLS teams in the SuperDrafts to come.

It needs to be noted that the establishment of the task force only marks the keeping of a promise that was made six years ago.

Before today, the rules in MLS (and NASL) were confusing. Now, they are slightly… less confusing? More confusing? Since MLS increased its Canadian stable to three teams, Canadians don’t take up coveted international roster spots on the Impact, Whitecaps and TFC. But they do take up international spots on American teams, unless they have dual citizenships or green cards. Meanwhile, Americans are domestics on Canadian teams.

The double standard has long been a bugaboo for Canada Soccer, baffling because USL, a fully professional circuit, has always counted Canadians as domestics on both Canadian and American clubs.

Canadian Soccer Association and CONCACAF president Victor Montagliani had promised that some sort of “solution” would be reached before MLS Cup.

Well, it is a sort-of solution.

This is how it will work, straight from MLS.

For a Canadian player to become domestic league wide:

“The player became a member of an MLS club academy, either in the U.S. or Canada, or a Canadian Approved Youth Club in the year prior to the year in which he turns 16;

The player signs his first professional contract with MLS or an MLS club’s USL affiliate.”

What is a Canadian Approved Youth Club? We’re not sure yet. More from MLS and Canada Soccer:

First off, I’d feel a lot more comfortable if Canada Soccer was solely responsible in determining what makes for an Approved Youth Club. Our national federation is supposed to be the vanguard for the game in this country.

And the parameters to qualify for domestic status MLS-wide will be very narrow. As it stands, only nine current MLS players would get domestic status (see the image below). And, for players already in the system, the hopes that they could get their breaks have been dashed.

And will teams in the coming Canadian Premier League get the Approved Youth Club status? If not, they would be at a severe disadvantage when it comes to bringing in young talent, especially if they choose to invest in academies. This enforces a very strict MLS/USL route for players. And, with the Whitecaps having so many academies and affiliates coast-to-coast, for now they have a massive advantage over TFC and the Impact.

But, even if the player is with an Approved Youth Club, he knows he pooches his domestic status if he chooses to try Europe, or if he signs for a team not in MLS or USL. There is now a clear barrier to a player dipping his foot in waters outside of North America or the MLS pyramid, for that matter.

What really troubles me, not as a soccer fan, but as a Canadian, is that the domestic-status deal ties a player to a decision he makes before his 16th birthday, let alone his 18th birthday, which is the age of majority. If we’re OK with kids allowing kids to be forced to make life-changing career decisions before they turn 16, let alone 18, what the hell is wrong with us?

If anything, this deal shows us more and more why we need a Canadian Premier League, where Canadian clubs form their own destinies free of foreign regulations.