October 25, 2021
9 New Articles
Home NASL & USL FC Edmonton “We can’t all be the very best of friends all of the time”: Tempers on display at FCE’s training session 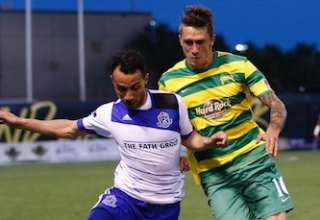 FC Edmonton has gone three NASL games without a goal. Included in that was a last-second penalty attempt that wasn’t converted in Saturday’s 1-0 loss to Tampa.

So, as brush fires burned just west of the city, the tempers were heated on the Clarke Field turf during Wednesday’s training session. Midfielders Cristian Raudales and Dustin Corea had to be separated after the team’s scrimmage came to a close.

Coach Colin Miller said that having two players come to blows — in front of a media contingent, too — wasn’t a bad thing. He said that, in a competitive environment, these kinds of scrapes happen. And they’re not necessarily signs of players who are troublemakers, but of players who care very deeply about their teams.

“I’d take that every day,” said Miller. “Every club I played at, I’d fought. Not that I’m condoning fighting or promoting fighting, but I’ve been in a few of those. But it’s only because I cared and other people didn’t care quite as much. I don’t think that was the case this morning. The guys, I think, are in a very good place. I don’t mind that so long as they shake hands after and we’re all good. We can’t all be the very best of friends all of the time, that’s for sure.”

How did it happen? Near the end of the scrimmage, Corea won a penalty. He marched to the spot to take it — and then he and Sainey Nyassi decided to try the Cruyff penalty, instead, the same kind of thing that Barcelona teammates Lionel Messi and Luis Suarez converted a few weeks back. Instead of shooting, Corea tried to lay the ball off for Nyassi, who’d dashed into the box.

The attempt went awry, and Raudales, furious that Corea wouldn’t try a straight penalty kick, made his displeasure known. The players jawed, then got to the sidelines and the shoving match began.

“I was away getting a ball that had gone into the stands, so I didn’t see what happened,” said Miller. “But, you know, when the penalty kick is there to be taken, I believe, in training or in a game, it’s there to be put in the back of the net. There was just a bit of handbags at 20 paces, there. It’s all good. I’ve been on that side of it myself; I’ve been the one throwing punches. These things happen. The guys care; it just shows you how much we do care about it.”