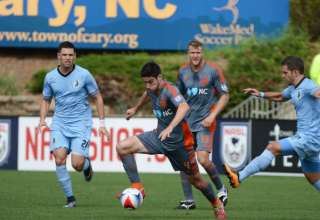 Drew Beckie in action vs. Minnesota in 2016. PHOTO: NASL

Drew Beckie had a choice. He was on a trial with Major League Soccer’s Chicago Fire. The Fire liked him enough to ask him to remain in camp for a couple of more weeks — but with no guarantee there would be a contract at the end.

Meanwhile, he had a solid contract offer from the Jacksonville Armada. He received the offer just after the conclusion of the 2016 NASL season. The Armada’s brass knew he was going to try and get back to MLS, but Beckie also understood that the NASL side couldn’t wait too long for him to make a decision.

So, Beckie decided to leave the Fire’s camp and finalize the deal with Jacksonville.

“I could have stayed with Chicago, but I had a firm offer in Jacksonville,” said the Saskatchewan-born Beckie, who has played in Canada’s U-23 program and was a former draft pick of the Columbus Crew. “But I couldn’t give up the contract in Jacksonville on a maybe.”

Beckie spent 2014 and 2015 with the Ottawa Fury, before joining the Team Formerly Known as the Carolina RailHawks in 2016. He was on a one-year deal plus an option in North Carolina, but he knew that he wasn’t going to be back in 2017. He said that without any bitterness; “I only have good things to say about that organization.”

If there has been an issue for Beckie, it’s that his versatility has become somewhat of a liability. In NASL games over the past three seasons, we’ve seen him at various spots in the midfield, at fullback, at centre back. But, when you’re known for being able to fit in various spots, you can get branded as a utility players. Beckie said he’s looking for more stability as a full-time right back with the Armada.

“The ability to play a lot of positions, it can be a blessing and a curse,” said Beckie. “Sometimes, it makes it hard to fit in.”

As well, if you’re seen as the utility player, you might train for a whole week in a fullback slot, but, on game day find out that you’re going to be in the middle of the park.

“I think they [Jacksonville] see me as a right back. I think this is a club going through a period of change, and I am excited to get started with them.”

Beckie had a contract offer from the Armada before news broke about the possible collapse of the New York Cosmos and the league. Beckie had to wait on news on if the NASL was going to survive or not.

“It was very tough, especially for Canadian guys,” he said. “It’s great that now all Canadians will be domestic players in the league (a change the league enacted a couple of weeks ago). But, even though that’s happened, we are down to eight teams in NASL, and that means fewer jobs for players.”

Of course, he is still going to make time to watch his sister, Janine excel in NWSL and as a member of the Canadian national women’s team. She won Olympic bronze last year, and her brother is sure she and her teammates can reach even loftier heights.

“I know the goal of the program is to be ranked number one or two in the world in the next couple of years,” he said. “And with (coach) John Herdman,  I think they can make it to the top.”