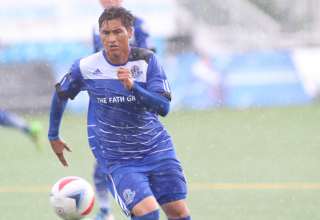 The Fort Lauderdale Strikers have lost just twice in their past 11 NASL spring/fall season and U.S. Open Cup matches.

Both of those losses have come to FC Edmonton at Clarke Field.

After a 46-minute delay because of lightning and torrential rain, the Eddies got spectacular goalkeeping from Matt VanOekel and a fantastic goal from Daryl Fordyce as they beat the Strikers 1-0.

At the end of the match, Strikers coach Caio Zanardi called the result “unbelievable,” feeling that his team had dominated the match and had created eight or nine very good scoring opportunities.

But, with the driving rain making holding onto the ball all the more difficult VanOekel held his team in the game until the second half, when the Eddies were finally able to spring a counterattack on the visitors. It actually started with a save from VanOekel; he parried away a strike from Jose Angulo. He did well to angle his punch well away from the Strikers’ attackers following up the play. The ball went up the field to Jake Keegan, who launched a long ball into the box for Fordyce. The Northern Irish striker got in between defenders PC and Julius James. His first touch pushed the ball to the centre of the box, splitting the defenders. He then smashed the ball past keeper Diego Restrepo.

“I made a run off of the second centre back and Jake played a great ball,” said Fordyce.

FCE coach Colin Miller said that, at halftime, he was concerned that Fordyce was playing far too deep in the formation, leaving Tomi Ameobi isolated as the lone striker. He encouraged Fordyce to get further forward, to make some runs that would challenge Fort Lauderdale’s back four.

But neither Miller nor Fordyce made any bones on who they thought deserved the game ball.

“Matt VanOekel was our man of the match,” said Miller. “He stood on his head for us today.”

“We went in at halftime at zero-zero,” said Fordyce. “We could have been three or four goals down.”

After the 46-minute delay, the Strikers took advantage of more than a few sloppy passes from the hosts, and launched a series of dangerous shots towards Van Oekel. Twice in a row he was called to make good stops on swerving shots from Luis Felipe. Then, he was able to parry away a free-kick attempt from PC.

Later in the first half, he sprawled to his left to stop a low Victor Pineda shot, after Geison Moura knocked down a cross in the Eddies’ box and laid the ball on a platter for his teammate.

There were more chances in the second; Angulo’s effort was turned into the goal going the other way.

But, with six minutes of stoppage time added, the Strikers kept pressing, and Paulo Jr.— acquired in a trade with Ottawa earlier in the week — had a fantastic chance to tie the game. He was wide open in the area to head the ball, but could only place the ball timidly right at VanOekel. It was Fort Lauderdale’s last pushback of the game, and Zanardi is likely still wondering just how his team didn’t get a single point of this one.

NICKLAW: Shawn Nicklaw, acquired by the Eddies from Jacksonville earlier this week, started at right back for the Eddies. Winger Sainey Nyassi missed the game due to concussion.

The Eddies are in third place in the NASL overall table, three points behind the New York Cosmos.