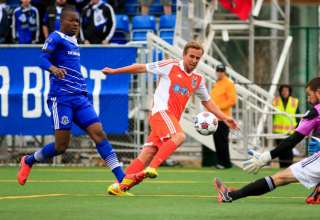 If you’re an FC Edmonton supporter, you can look at the glass as half full or half empty.

Half full: Thanks to the heroics of keeper Matt VanOekel, the Eddies were able to battle the Carolina RailHawks to a 1-1 draw in the first game of the 2015 NASL season at Clarke Stadium, a game that the home side in no way merited a point.

Half empty: For the second game in a row, the Eddies started very slow and gifted away chance after chance to the opposition, and have only one point to show from what most handicappers would have seen as two winnable games. A loss on the road to expansion Jacksonville followed by a draw at home to Carolina, a team that yielded nine goals in two losses to the Eddies at Clarke Stadium last season.

“It was as poor a half as I’ve seen since I’ve been here,” FCE Coach Colin Miller said of the Eddies’ first 45 minutes against the RailHawks. (Remember, the week before, the Eddies yielded three goals in the first half against Jacksonville, including a marker within 12 seconds. So, for Miller to say the half against Carolina was the worst he’s seen, well, that’s saying something.)

“It was very disappointing,” said Miller. “Not many players would get a passing grade today.”

“We deserved three points and didn’t get them,” said RailHawks coach Colin Clarke, who lamented a series of missed opportunities by his club.

Carolina opened the game with the wind at their backs. Or rather, a gale at their backs. The gusts were clocked at 60 km/h and the sustained wind was measured at 40 km/h by Environment Canada. Right off the bat, a long kick by Carolina keeper Hunter Gilstrap fooled the Eddies back line. On the bounce, jt carried past them — and Carolina’s Mark Anderson got in alone, only to have Van Oekel charge off his line and block the shot.

Van Oekel robbed Anderson on a similar break a few minutes later. He also made a great stop from close range on either Daniel Scott or Rangers legend Nacho Novo — both were on the doorstep — off a low cross from Ty Shipalane, who had beaten FCE fullback Kareem Moses down the wing.

Within 15 minutes, it could — no, it should have been 3-0 to the RailHawks. But, thanks to Van Oekel, there were still zeroes on the scoreboard.

“It was crazy out there,” said Van Oekel. “The wind was blowing in our faces, we had some problems with communication.”

But he said it was a real confidence builder to make such a huge save in the first minute — and it got him into the game right away.

Finally, the RailHawks got their breakthrough in the 41st minute. Novo was left wide open at the back post, and had an easy time finishing a cross from Leo Osaki. There was no Eddie within yards of the RailHawks striker, and VanOekel, for once, couldn’t keep his team from conceding.

Yet, the RailHawks had to settle to be even at halftime, despite the huge advantage in wind, shots and possession. FCE’s Sainey Nyassi dashed up the right wing and crossed to the top of the box, where the left-footed Lance Laing used his right foot to side-foot the ball past Gilstrap.

“Our keeper had very little to do except deal with some crosses, which I thought he did very well,” said Clarke.

Laing and Nyassi were brought off midway through the second half, and Oskar Hauksson and Michael Nonni made their season debuts.

With Wes Knight and Neil Hlavaty starting — and Chris Nurse coming on as a sub — there were plenty of ex-FCE players on hand for the visitors in orange. But they’ll likely wonder how they got only a point; for Carolina, it was the team’s best performance in Edmonton in a long time.