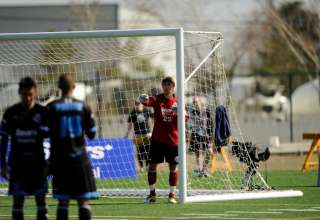 Michal Misiewicz, the Canadian keeper who wowed us during the U-23 team’s magical run in the Olympic qualifiers, is now without a club.

Misiewicz was one of three players cut loose by FC Edmonton on Tuesday.

Misiewicz had fallen to No. 4 on the FC Edmonton depth chart after he began the season as the club’s starting keeper. Injuries to Lance Parker and David Monsalve, coupled with Misiewicz’s performances at the Olympic qualifiers, saw the Calgary-area product get the starting job out of the gate.

Misiewicz was excellent in his first three starts, showing us the off-the-line bravery and unorthodox style we saw when he played for Canada, allowing just two goals in his first 270 minutes.

But it all came off the rails during FCE’s home opener, when Misiewicz allowed four goals against Minnesota — many of them preventable. After that match, he didn’t see the field again for the Eddies. After Monsalve slid down the depth chart, Parker regained his job as the No. 1 keeper and the steady John Smits, who had just some out of CIS soccer, took over as the No. 2.

Misiewicz was also involved in a reserve-match melee against Edmonton AMSL side, Scottish.

Also gone are French defenders Kevin Hatchi and Jonathan-Joseph Augustin. The Hatchi move has been rumoured for a week but was made official on Tuesday. Serisay Barthelemy was offloaded last week — so now all three French players represented by the same agent, NTL Sports Management — have been released by the club.

“At this point we felt that changes had to be made,” said technical director Joe Petrone in a release issued by FCE. “We’re looking at fresh faces so we need to make room. We want to keep the core intact but we also need to look at new players to bring in. Each of the players did well for our team and we wish them all well.”