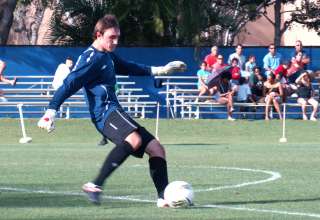 FC Edmonton could carry four goalkeepers in the 2012 season.

In camp this week is former Canadian U-17 and U-20 keeper Michal Misiewicz, who most recently played club football in Poland with Polonia Bytom. He also spent time with Sunderland’s U-18s. He’s currently part of Canada’s U-23 player pool.

With David Monsalve and former University of Toronto keeper John Smits already in the fold, Misiewicz offers the team the chance to carry three goalkeepers if former Chivas USA keeper Lance Parker isn’t ready to start the season. The club says Parker is about 95 per cent recovered from last season’s compound fracture to his arm and is expected to join the team when it heads south for its U.S.-based training camp. Parker has been rehabbing in Florida.

And, if Parker is ready, the club would be willing to carry four goalkeepers. Last year, within a very short time frame, Parker got hurt, Rein Baart was suspended and third goalkeeper Jaswinder Gill was fighting injury, forcing FCE to bring amateur Justin Ammar into the fold. Lesson learned — and the team could be in a situation where it keeps everyone on board when Parker gets back to 100 per cent.

As well, defender Anthony Di Biase, who played PDL soccer with FC Edmonton’s Dominic Oppong in Harrisburg, arrived for his trial with FCE. Di Biase played a season in the setup of Belgian side Olympic Charleroi.

As well, when FC Edmonton’s brass head down to Florida Feb. 10-12 for the NASL combine, it expects to see at least eight or nine Canadians trying out. And, with the team still prioritizing its left side of defence as its greatest need, there could be options there.