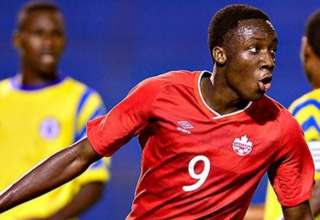 It just wouldn’t be a Canadian national-team roster announcement if we didn’t focus more on who isn’t on the team than who was on the list.

The roster for Canada’s U-20 side that will go the CONCACAF Championships was announced Thursday. And missing from the list was Ballou Jean-Yves Tabla, Canada’s reigning U-20 player of the year. The Montreal Impact phenom was with the Canadian U-20 program throughout its preparation for the tournament, but turned down a spot on the roster.

As well, Gale is missing five players who were eligible for the team weren’t included on the roster due to injuries — including Shamit Shome, the Generation Adidas player who was drafted by the Montreal Impact after being sold to MLS by FC Edmonton. The other four missing out are goalkeeper James Pantemis, the Montreal Impact’s David Choiniere, Hearts’ Marcus Godinho and TFCII keeper Phil Di Bennardo.

Gale said the shame of these injuries is that most of those players would have been available to the Canadian side had the tournament just kicked off a couple of weeks later. The CONCACAF championship, which serves as a qualifying tournament for the U-20 World Cup, begins Feb. 17 in Costa Rica. Canada did not get a favourable draw; the Canadians are in Group A, which also includes Honduras and Mexico.

Gale said Shome was carrying an injury through the MLS Combine. He was hurting from the end of the 2016 NASL season, but the Canadian coach said he didn’t have the aches and pains addressed as he wanted to play through the MLS draft process and impress the scouts. At the U-20 team’s recent camp in Panama, Gale said Shome wasn’t the same kind of player that his coach was used to seeing, and needed to get the injury addressed. This also might explain Shome’s slide to the end of the second round of the draft.

Choniere hurt his ankle three weeks ago in Toronto, and Godinho’s status was “touch and go” ahead of the roster announcement. Pantemis is back to training and would have been ready to go if the team only had the luxury of a few more days.

Even though Shome is out with injury, FC Edmonton’s academy did get a player onto the squad; Aymar Sigue (now at Penn State University) made the the team.

“We have selected the best 20 players available to us that we have,” said Gale. “We’ve gone with a selection of players who are in their best possible moments.”

What does that mean? Gale admitted that two years ago, it may have been a mistake to pick players  based on the strength of their performances from a few months ago. He thinks the players he has are in their peak-performance modes right now.

The team’s first opponent is Honduras; and Gale knows this will be a challenge. The Honduran youth side’s players spend the weekends with their respective clubs, but spend Mondays thru Fridays training with each other. They are, for all intents and purposes, a national side that functions as a club.

“It’s a snapshot of your program over six days,” he said of the group stage. “We prepare the best we can for that, emotionally, tactically and physically. We try to pass on the lessons learned from other age groups.”