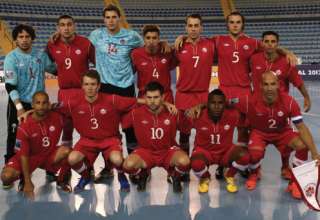 Jordan Ongaro led the PAC-12 in goals scored last season; but, after he was drafted, the Canadian striker found out that his homecoming wasn’t going to be as happy as he’d hoped…

It was not a banner spring for Alberta-born forward Jordan Ongaro, who began his post-university soccer life with releases from two professional organizations before signing on with, well, let’s hope he gets a gig for the 2014 season.

Ongaro played his high school soccer inEdmonton for Archbishop O’Leary and suited up with the elite Southwest United side for club competitions, but his earliest football memories go back to the age of five or six.

“My uncle had an academy, so I started getting into it with him, and he’s helped me out through the years” says Ongaro, referring to soccer lifer, Ross Ongaro.

Presently the head coach of the Chinese national beach soccer side, the senior Ongaro played for the Edmonton Drillers of the original North American Soccer League. He later managed another Edmonton Drillers franchise, one that played indoor turf-and-boards variety of the game in the National Professional Soccer League. That team kicked off in the Alberta capital in 1996 and folded in 2000. In the winter of 1996-97, the Drillers’ first campaign in the NPSL, Ross Ongaro coached a mercurial midfielder named Nick De Santis, who now serves as sporting director with the MLS Impact.

As a teen, Jordan Ongaro was tabbed to suit up internationally, and an exhibition match against San Diego State led to four years at that institution as an art student and soccer star.

“I was with the U-17 national team and we played against them. (SDSU men’s soccer coach) Lev Kirshner gave me a chance to go there right after, so I did,” says Ongaro, who is a handful of credits short of completing his degree.

After co-leading the Aztecs with five goals as a sophomore, Ongaro captured the scoring crown outright in his junior season with seven and notched 10 in 2013, the first San Diego State player to reach double figures since Kirshner assumed the direction of the school’s soccer team, one that has had seven players drafted by MLS in the past nine years. Ongaro’s 10-goal campaign in 2013 led the PAC-12 conference, which features some of heavyweights of men’s collegiate soccer in America.

Like his uncle, known for beach and indoor soccer as much as he is for the outdoor game, the younger Ongaro has established himself as a player who can be effective on grass, turf or the hardcourt.

The Montreal Impact called Ongaro’s name in the fourth round (67th overall) of this winter’s MLS SuperDraft. The supplementary rounds are always a crapshoot, and no player taken that late is ever anything but a long shot to make the team.

Despite a stellar college-soccer career, Ongaro felt some trepidation going into the 2014 SuperDraft.

“I didn’t get invited to the Combine and I wasn’t on any polls, so at first I was nervous and then as the time went by it got even more nerve-wracking,” he recalls. “Finally I got picked by Montreal in the fourth round and it felt incredible. We were starting get a little depressed at one point but when I got picked it was a big boost.”

Moments after Ongaro was picked, his phone rang. It was De Santis on the line.

“He just said congratulations, come in and work hard and say hi to your uncle for me.”

Drafted on a Tuesday, Ongaro was Montreal-bound three days later. On Friday, he got his medical. Saturday, his physical. Sunday was an off-day before camp started in earnest on the Monday.

Ongaro got to kick the ball around and match names to the other faces in camp on the first day of training before having to do something no probationary hire ever wants to, take a sick day on the second. Struck down by an intestinal malaise, Ongaro was kept out of training for the next few days.

While the symptoms disappeared in a day and he was back to training by Friday, it took somewhat longer for Ongaro to bounce back completely.

“I wasn’t at 100 per cent when I got back. It was more the following Monday and Tuesday that I felt pretty good,” he says.

While the young attacker was recovering, De Santis spoke about the shared history between him and another member of the Ongaro clan and whether that may have played a part in Jordan’s selection.

“I played for his uncle, Ross Ongaro, but (Technical Director) Matt Jordan handled most of the college evaluations going into the SuperDraft,” said De Santis during the Impact’s camp. “Ongaro’s been unable to practise the past few days, so it’s impossible to give an impression, but he’s a big, strong forward who has speed, times his runs well and can finish. Basically a typical number nine.”

Only a half-dozen first rounders from the 2013 SuperDraft saw MLS minutes last season, so the odds were always going to be stacked against a fourth rounder.

De Santis emphasized that it was a big step up from the college ranks to MLS and intimated that Ongaro could benefit even from an abbreviated term with the club.

“I told him to play the same way he has and to work hard, listen to the coaches and to enjoy  his time with the club and take as much from the experience as possible,” De Santis concluded.

On February 10, a week before the Impact headed to Florida for a preseason tournament, the team released Ongaro, relinquishing all further claim to his services after a handful of healthy sessions. Nonetheless Ongaro feels that the brief time he spent in Montreal, illness aside, was profitable.

“It was amazing,” he says. “Unfortunately I got sick in the first week so I didn’t have that much time to play with them but the time I got with (Marco) Di Vaio and Matteo (Ferrari), legendary professional players, was awesome. It was a great experience.

“I learned a lot within the two weeks. The professionalism and just watching Di Vaio play, learning how to make runs and when to make runs and his perspective, which was good. Di Vaio was a very kind guy, but every single player was giving good information and trying to help me out.

“The speed was a major change and the strength within the players. It’s a way different level than in college.”

Heading home, the six-foot, 175-pound forward was invited to trial with FC Edmonton, the NASL side that, under previous management, had tried to get him to leave San Diego State to join it.

But FCE head coach, Colin Miller, unimpressed with Ongaro’s first week, told the local youngster that he had to elevate his performance in the second if he was to make the squad.

Ongaro said that he felt good at the midway point.

“I got by the first week. The quality is much higher than I thought and it’s getting better so I just have to work hard,” he said while still on trial with the Eddies.

While the effort may have been there, the results were not. FC Edmonton parted ways with Ongaro on Feb. 28.