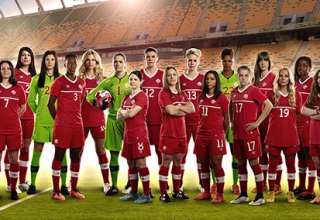 The Edmonton Aviators may have been a blip in the history of the Canadian soccer. But two of their alumni will make a return to Commonwealth Stadium — where the Aviators played their one and only home season schedule, back in 2004 — when the Canadian women’s team opens the World Cup against China on June 6.

Keeper Stephanie Labbe and midfielder Selenia Iacchelli were teenagers when the Aviators played in the W-League back in 2004. The ownership group also launched an A-League (USL) franchise, but declared bankruptcy during the season. The women’s season was done, but the men finished off the season playing in different venues as “Edmonton FC.”

Labbe and Iacchelli were named to coach John Herdman’s 23-player roster for the Women’s World Cup, announced Monday. While Labbe’s inclusion was expected, Iacchelli comes as a bit of a surprise. Her career has been plagued by injuries, and knee problems kept her from playing for the NWSL’s Western New York Flash in 2014. In fact, Iacchelli came back to soccer after injuries were supposed to have derailed her career for good. Her rather remarkable story was told in the first issue of Plastic Pitch magazine (spring 2014). In honour if Iacchelli’s selection, the 2014 article has been made available, below. We hope, for those not familiar with the magazine, we feels this an example of why Plastic Pitch is worth a read.

I remember covering both of them, under the tutelage of coach Janine Helland, as they practiced at various community park fields in Edmonton and played their matches at Commonwealth Stadium. Helland still feels to this day that, had that Aviator team had another year or two to gel, that it could have been a real contender in the W-League.

But, with Canada playing its first two games in Edmonton, it’s appropriate to give a nod to the two former Aviators who’ve made the final 23.