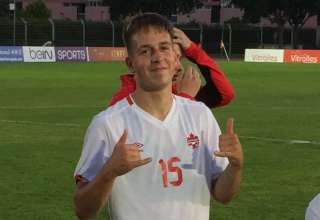 So, after all four teams have played their second games at the Toulon U-23 Tournament, Canada is topping a group that also features Turkey, Portugal and France.

A goal from Noah Verhoeven, a dual citizen who just returned to the Canadian program after spending the last couple of years flirting with the American national set-up, gave Canada a 1-0 win over Turkey on Thursday.

Verhoeven won it late in the second half after coming on as a sub; he fired a low, bouncing cross into the box that snuck into the goal just inside the far post. With two Canadian attackers rushing in, Turkish keeper Muhammad Sengezer had to respect the fact that the ball could be redirected. When the ball skipped by clean, he couldn’t react in time to keep it from going in.

Verhoeven’s winner came after Liverpool youngster Liam Millar had two great chances to get a goal for Canada.

On the first, Sengezer came out and made a great save on Millar’s volley after a Canadian free kick was placed into the mixer. The ball rattled around and finally fell to Millar, who wasted no time unleashing a low drive.

Millar’s second chance came on a break — and it offered a bit of a lesson for the youngster. Sengezer came out to take away the angle, and Millar slid his shot past the keeper. Thinking the ball was headed in, he turned away from goal, looking to begin his celebration. But the ball came off the inside of the far post and stayed out. Yes, some Turkish defenders were scrambling back, but Millar will know next time to follow his shot in; if a rebound comes off the post, give yourself a chance to get in the mix to have another attempt on goal. My guess is that next time, Millar won’t turn away to celebrate until after he’s seen the ball cross the line.

Turkey did have a chance or two, but were, for the most part, limited to speculative attempts that gave Canadian keeper Alessandro Busti little trouble.

The one exception came halfway in the second half, when Canadian defender Derek Cornelius scrambled a shot from Baris Alici off the line, then Alican Ozfesli pushed his attempt on the rebound over the bar.

Canada is a point ahead of Turkey and Japan in the table, and three up on Portugal. Japan is the third and final group-stage game left in the schedule. The 10-man Japanese team beat Portugal 3-2 before Canada and Turkey took to the pitch in France.

As the match commentator said of Canada “They surprised us against Portugal, they’re shocking us against Turkey.”