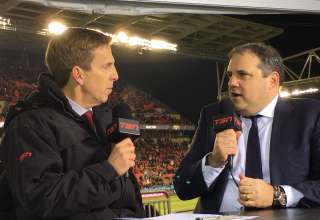 In the summer of 2016, Major League Soccer was the television property no one wanted. Despite strong ticket sales in the three Canadian MLS markets — and the fact that Toronto FC was, well, good, did nothing to move the needle when it came to people in this country turning on the television.

Ratings dipped below 50,000 mark per game and, as reported in Plastic Pitch 10, the topic of MLS was off-limits for Canadian network executives.

Then, MLS got its miracle. The playoffs. A semifinal between Toronto FC and Montreal, and an MLS Cup held in Toronto. Rating went from not even moving to the needle to beating hockey. MLS Cup got more than 1.5 million viewers in Canada.

Understand that the interest in the  MLS playoffs was not the product of a steady rise in the ratings. It was a massive spike, with many Canadians watching the league for the first time.

So, as TSN and MLS announced their new five-year deal on Tuesday, the question is: Were the playoff ratings the product of a perfect storm, or will those numbers translate into better regular-season viewership? Will the fans who watched the two legs of TFC-Impact tune in when Toronto travels to the west coast for a late kickoff, or when the Whitecaps head east and kickoff is at brunch time in Vancouver? Will fans who have already watched two or three Premiership matches on Saturday morning stick around to watch more soccer in the afternoon and evening?

That’s the big gamble. But, thanks to the massive MLS playoffs spike, it’s one that’s being made. TSN now has the rights to every Toronto FC and Whitecaps game, and will broadcast some Montreal Impact matches. TVA will get the exclusive French-language rights to the Impact.

The length of the TSN deal, five years, allows the network to keep developing the audience. And if there’s one thing TSN does well, it gets behind a property it knows it has for the long term. See how TSN treats the Canadian Football League or the World Junior Hockey Championships. TSN has made them appointment viewing.

“By expanding our package of games, Canadian fans can expect MLS on TSN to continue to elevate the league and its players,” TSN President Stewart Johnston was quoted in a release.

In the end, TSN’s success will be determined by how well viewers across the country react to games in July in a league that has proven us the regular season doesn’t really matter until the fall — thanks to the large number of top seeds who fall early in the playoffs, and the number of just-get-into-the-playoffs teams that end up winning it all. Selling marquee matchups between Toronto and Montreal is one thing; midseason soccer is another.