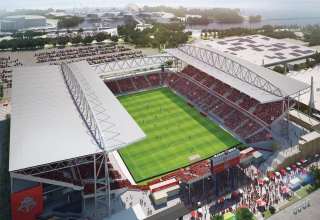 TFC has lost just once this season at BMO Field.

In Major League Soccer — with its varying climates, altitudes and great distances between stadiums — has always offered more of a home-field advantage to its members than most other league in the world.

Last season, only one team was able to boast that it won as many as it lost on the road; the Vancouver Whitecaps went 7-7-3. In the 2013 and 2014 campaigns, only one team each season could boast a winning road record.

But this year is showing signs that road trips are becoming more difficult for MLS teams. So far, road teams have a combined record of 35-113-71.

Player after player has told me about how difficult it is to play a summer game in Houston’s oppressive heat and humidity, or try and survive the thin air of Salt Lake City. Or, dealing with the fact that playing surfaces vary wildly from city to city. That’s life. But, when travelling, teams should be trying to mitigate those home advantages. And, for the most part, they don’t.

MLS has always banked on the fact that the league is very competitive. So, at some point, you have to wonder if the league will have to find a way to give road teams more fighting chances,

Ironically, one of the rules designed to ensure the league is competitive is what is hurting the road teams. In the Collective Bargaining Agreement, the number of charter flights a team can take is limited to four in the regular season. For the rest of the season, teams are expected to fly coach.

Well, “limited” isn’t the right word. Because the CBA says that MLS has the power to say “voila!”and change the charter-flight policy at any time.

This language comes right from the CBA: “MLS shall continue its policy of allowing Teams to provide chartered air transportation for four legs of flights per year, and nothing in the CBA shall prohibit MLS, in its sole and absolute discretion, from providing additional chartered air flights.”

The reason charter flights are limited is simple; it dates back to the early days of MLS. Not only did it limit travel costs, it created an all-things-being-equal travel schedule. Basically, a rich owner who wanted to splash cash wouldn’t get the competitive advantage of charter flights over a most cost-conscious owner.

But, in 2016? It is MLS 1.0 thinking that is still being applied today. In fact, you could argue that allowing teams to spend more on travel will do more to increase the quality of soccer than using that money to splash on Designated Players.

MLS teams, for the most part, arrange their travel the same way NASL teams do; they fly coach. One advantage MLS does have is that the league has more teams in the largest North American metropolises; so there’s better chances of getting direct flights. But, flying coach and trying to make road trips as short as possible — well, if you’ve ever had to fly somewhere for a day-long business trip and then jet back, you know how much of a grind that can be.

And the CBA doesn’t allow for administrators go onto Expedia and find the cheapest fares possible with umpteen connections.

But it’s not enough. The road teams’ records are proof of that. None of those 11 one- or zero-win-on-the-road teams has worse than a .500 record at home. It’s not like they’re bad both home and away.

So, why do travel restrictions not work in the modern MLS? Geography. Teams in the Eastern Conference are bunched together. MLS does not require teams to fly when the opposing stadium is less than 250 miles away. And, if teams do fly, they have a lot of puddle jumps. But, for a team like Vancouver, an in-conference trip to Los Angeles is a flight of about three hours. Salt Lake City and Denver are pretty isolated in the mountain time zone. The fact that they can only access the same number of charters as New York City FC is, well, an Animal Farm kind of equality.

Now, I’m not wishing to add to the travel budgets of MLS teams without their approval; all that I am trying to illustrate is that, more and more, MLS, is win all your games at home, lose them all on the road, everyone ends up fairly close in the standings. But, at some point, MLS will understand that boosting TV ratings will mean that you have to give Toronto FC fans a reason to stay up when their team plays in Los Angeles at 10:30 p.m. local time. It means giving Vancouver fans a reason to leave work early when their team goes to the East Coast for a midweek game.