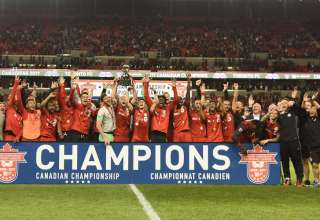 Their 2016 MLS Eastern Conference Final was arguably the most entertaining post-season matchup in the history of the league, filled with thrills, spills, a comeback and atmospheres in Montreal and Toronto that were on the boil.

So, what to do for an encore? The 2017 Canadian Championship final will go down as one of the best in the history of this tournament. And, for the second year in a row, Toronto FC won the championship on a last-gasp goal. In 2016, Will Johnson’s broken-leg shot beat Vancouver at the death. In 2017, deep in stoppage time, Toronto FC got the deciding goal from Sebastian Giovinco, set up by a wonderful run down the left side by Canadian Raheem Edwards.

The Reds sent their home fans into raptures with a 2-1 home win, 3-2 on aggregate.

This game had controversies, wonderful goals, full-on bodychecks and a real edge. To be frank, these teams hate each other. With a capital H. And it’s wonderful to watch. After the Giovinco tied the game 1-1 in the second half, we sped towards a dizzying finish that featured a controversial non-call from referee Dave Gantar and a red card to Impact captain Patrice Bernier.

Whew. Let’s start at the beginning.

TFC had the majority of the possession early in the match, and Giovinco had a great look at goal just five minutes in, but sent a shot right at Montreal keeper Maxime Crepeau. Later in the half, Giovinco sent a cross to Tosaint Ricketts; TFC’s Canadian striker headed the ball towards goal, but Crepeau leaped to make the save.

It was the Impact, though who would take the lead thanks to a wonderful 20-yard effort from the Canadian who turned down the invite to play for the U-20 team, Ballou Jean-Yves Tabla.  Toronto FC were actually in good defensive shape to handle the Montreal attack, but then Chris Mavinga made a rash decision to try and dive in on the Impact’s Blerim Dzemaili. Mavinga left the defensive line so he could dive in and win the ball — he did get a touch, but it caromed right back to Dzemaili. Now, well away from goal, Mavinga was down and out of position, when all he had to do was stay on his feet.

Mavinga’s error presented his defensive partner, Drew Moor, an awful choice. Should he hold back or try and cover Mavinga’s mistake? He made the decision to step up and challenge Dzemaili, to make up for Mavinga’s dive. In that moment when Moor charged in, Dzemaili played the ball into the now-gaping hole in the backline — where Mavinga and Moor should have been. Tabla got to the ball, and his shot beat TFC keeper Clint Irwin.

The half ended with a terrific collision between Montreal’s Kyle Fisher and TFC’s Steven Beitashour. TFC’s fullback charged up the line, and Fisher, arriving late, drove his shoulder right into the TFC player’s midsection. That led to a crowd around referee Gantar, and Fisher got the yellow for a check that would have made Zack Kassian proud.

Giovinco tied the game in the second, doing well to chest down a ball in the box, then leaving Fisher in his wake as he drove the ball into the corner of the goal.

With only a couple of minutes left in regulation, Giovinco was brought down by Fisher in the box in what looked like an easy penalty call. But Gantar upheld a proud Canadian tradition — that referees put the whistles in their pockets in playoff games. He shook off the protests and the game played on.

While Gantar wouldn’t award a penalty, he did send off Bernier with just a couple of minutes to go. The Impact’s captain lost control of the ball and then put his studs up high on Marky Delgado’s ankle. That led to another crowd of players around the referee and a shoving match.

With Montreal down to 10 men, TFC pushed to win the game without needing to go into extra time. And Giovinco answered with his second goal of the match — and he tied FC Edmonton’s Tomi Ameobi as the tournament’s all-time scoring leader. Both have five career  Voyageurs Cup goals.

(That should help with the quiz below).