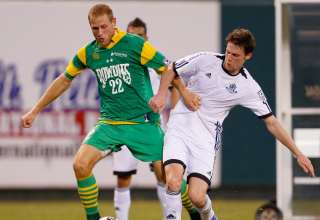 FC Edmonton was playing its fifth game in two weeks — and its third over the course of six days. On Wednesday night, the Eddies were in Vancouver. On Saturday night, they were in Florida, three time zones away.

Oh yeah, and they had to face the defending NASL champs, too.

If there was ever going to be a game that was about survival, Saturday night’s match between FC Edmonton and the Tampa Bay Rowdies was going to be it. And a 1-1 result, which brings this brutal stretch of the schedule to an end, is done. Now, the Eddies only play twice over the next three weeks — both at home.

And they’ll deserve the rest. Really, the Eddies could have taken all three points. Daryl Fordyce played his best game so far in NASL — the Northern Irish attacker played a role in Shaun Saiko’s equalizing goal and caused problems for the Rowdies all night long. And he forced keeper Diego Restrepo into an outstanding second-half save, as Fordyce’s 59th-minute shot from the top of the box was labelled for the bottom corner.

“It (how the team responded to going down early) was awesome.” said Saiko. “Most of the guys weren’t here last year, but as one of the players who has been here, we go down 1-0 on the road and it would be easy to think ‘here we go again.’ But, by the second half, we were taking the game to them. They were the ones who looked like they were tired, and we could have won 2-1 or 3-1, to be honest.”

“In the last 10 minutes of the first half and the last 45 minutes, our players wee absolutely phenomenal,” said FCE coach Colin Miller. “We just played a good Whitecaps side, and we played the last 40 minutes down a man. Before that, we beat the team that won the league (San Antonio) last season, and then we face the Championship winners. The response from the guys was absolutely magnificent.”

Even though the Eddies were into their sixth half of soccer over the last six days, they somehow found another gear in the Florida heat, and could rue the chances that went wanting. Michael Cox had a couple of clear chances — but couldn’t convert. And, late in the game, Fordyce forced a couple of goal-line clearances from the Rowdies defenders after Restrepo went wandering.

And the Eddies bounced back after an early suckerpunch to the gut. Before the game was 20 minutes old, the home side had the lead. FCE keeper Lance Parker was called for bringing down Rowdie Luke Mulholland in the box, and Georgi Hristov converted the penalty.

In the second half, Cox went down after colliding with Restrepo in the Tampa Bay penalty area, and Miller felt the teams weren’t being treated equally.

“I’m devastated. I don’t think theirs was a penalty. I thought our back four did very well. And you can see Lance gets to the ball first, their player goes down and he makes a meal of it. Then we have Michael Cox alone in the box and, same thing, and… it’s frustrating.”

But FCE drew level late in the first half. Robert Garrett chased a lost-cause ball down the right wing and ended up winning the ball back. He crossed the ball into the box, Fordyce flicked it on with his head and it fell to Saiko at the back post. Saiko took one touch and smashed a left footed shot into the goal.

Miller said that the Eddies did get a break from Mother Nature, as the game time temperature was a bearable 77 F, not the usual heat and humidity the Eddies have faced when they head to the South.

“One thing, too was the size of the pitch,” said Miller. “I think that’s the smallest pitch I’ve ever seen a (pro) game played on. But Tampa is a very tough team at home. Ricky (Rowdies coach Ricky Hill) knew we were playing three games in six days and they didn’t give us any time on the ball and, early in the game, we had problems adjusting to that.”

But, as the half went on, the Eddies grew into the game. And Miller decided to move to a 4-4-2 rather than having Cox as the lone striker — to allow FCE more chances to press the Rowdies up the pitch.

Yes, the Eddies have just five points through five games. But four were on the road. Nabbing draws here and there isn’t bad — as long as you win the home games. So, the real test for the Eddies begins next week, as the home-heavy part of the schedule begins.