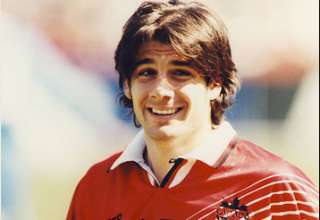 When players I’ve covered over the years earn major awards, I don’t think about the stats they’ve accumulated over the courses of their careers. I think about the moments I remember the most vividly, the marks that these athletes made on my brain. It’s what makes sport so special, the connection between athlete and spectator.

And in the end, that’s what we in the sports journalism business are — spectators, albeit spectators who bring laptops to the games.

In the cases of Janine Helland, Jason De Vos and Paul Peschisolido, they were all part of moments that remain fresh in my mind. All three were named as inductees into the Canadian Soccer Hall of Fame on Friday.

In the case of Helland, the bio tells us that the University of Alberta grad played for Canada in two World Cups — in 1995 and 1999, and was twice considered for the Female Player of the Year award. But I remember a lot of chilly spring afternoons in 2004, talking with Helland after Aviators’ practices. She was the team’s head coach, and the team was an extension of the optimism about women’s soccer in Alberta after Edmonton nearly sold out Commonwealth Stadium for the 2002 U-19 final.

Because of budget issues, the Aviators, which lasted only a year in the USL’s W-League (like their men’s-team A-League cousins, the Aviators/Edmonton FC franchise) before folding, held their practices at community parks. More often than not, they could be found training at Tiger Goldstick Park in the city’s east end, in the shadow of the smoke-spewing industrial stacks of Refinery Row.

With only two weeks worth of a training camp before the season, and the team depleted by call-ups to Canada’s U-19 team, Helland led the Aviators to a 7-5-2 record, good enough for third in the eight-team Western Conference. That’s pretty good for a coach who had precious few resources.

I remember one of our last chats being about the optimism for the 2005 season; that the team had come along in 2004 and would be able to challenge the likes of the Sounders and the Whitecaps in the next W-League campaign. Alas, for the women’s Aviators, that campaign never came.

As for Peschisolido, both soccer supporters in Canada and England will remember him well. Throughout the ‘90s, he was a regular starter for Canada, partnering with Alex Bunbury in the attack. You could argue that we haven’t produced as reliable or talented an attack partnership since then.

English fans will remember Peschisolido as the constant scoring threat a division below the Premier League. His goals kept getting his teams promoted — and, cruelly, as soon as they were promoted, he’d find himself at another club, looking to help it make it to the EPL. It was cruel.

For me, the great Pesch moment came in 1996. Canada’s de facto home for World Cup qualifying matches was Edmonton’s Commonwealth Stadium, which the local press had lovingly nicknamed “St. Paul’s Cathedral” because of the strikers knack for scoring goals on the bumpy grass pitch.

Canada was playing a unique doubleheader at home to Cuba. Because Cuba, at the time, had no suitable field, its “home” matches were all played on the road. And, in the first match of that doubleheader, Pesch scored the nicest goal I’ve ever seen a Canadian player score in a game that meant something. From my match report in Oct. 17, 1996’s Vue Weekly (I was the editor of the alternative weekly at the time and abused my position to squeeze soccer coverage into the paper):

“Three defenders challenged him for a ball in the air. He took it off his chest and reversed direction, allowing him to gain a valuable step on the trio chasing him. He cut across the box, beat a fourth defender, whacked the ball off another defender’s leg and volleyed the rebound with his left foot over Cuban keeper Odelin Molina.”

As for De Vos, we all know him as a strong advocate for change in Canadian Soccer, and, with TSN, he’s shown he’s the best colour guy in North America. (As someone who sits in the booth, I watch the games with a bit of professional development in mind, and I do try and take cues from those I feel do great jobs)

De Vos was a fixture in the centre of the Canadian back line, and had a very good career in the U.K., playing with Dundee United, Wigan and Ipswich Town. So, it’s odd that the thing I remember best is… a goal.

The 2000 Gold Cup final, in Los Angeles. A high, looping corner from Martin Nash was met at the far post by De Vos. His low header snuck across the goal line, and sent Canada on its way to a 2-0 win over Faustino Asprilla and Colombia in the final. The ball went underneath keeper Diego Gomez, who also committed the foul that led to a penalty later in the match. De Vos scored the winner in the most significant international tournament win this country has, well, ever enjoyed.

For all these moments, I can only say thank you. And congratulations.