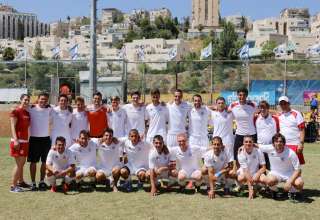 The Canadian men's team in Israel.

Canada enjoyed its best-ever finish at the recently completed Maccabiah Games in Israel.

The Games bring together the top Jewish athletes from around the world; and, in the football tournaments, Canada was able to take achieve three podium finishes. Canada’s men won bronze, and the women’s program and the U-18 women’s team also finished third in their respective tournaments.

The men’s team featured former Toronto FC and University of Toronto product Kilian Elkinson, Yale graduate Brad Rose, who took a stab at making the USL last year, and 45-year-old Jason Mausberg, a veteran of the games. Colin Jacques, a Simon Fraser University forward, was reunited with Koch for the Maccabiah Games. Ben Ur, the keeper from Dalhousie University who was also invited to the USL combine, manned the goal for the Canadian side

Also on the men’s team was Jordan Kalk, grandson of South African football legend Freddie Kalk, who scored more than 250 goals in domestic league play and was linked to moves to the English league.

The group was coached by Alan Koch, who led Simon Fraser University to the NCAA-2 final four last season, and is currently putting the Clan through its preseason paces. The Clan leaves for Costa Rica next week to play a couple of pro teams as the squad prepares for another season representing Canada in the American collegiate circuit.

“It was an amazing experience,” said Koch. “I’m not Jewish, I’m not part of the Jewish community, but it was a tremendous experience to be part of the group. People told me it was going to be an unbelievable experience — and it was that, and more. We were lucky to be based in Jerusalem, and to be able to explore the history of the city, the Jewish quarter, the Christian quarter, the Arab quarter, it was amazing.”

The Canadian men’s team had players from British Columbia, Alberta, Manitoba, Ontario, Quebec and Nova Scotia; so Koch met his players in Toronto for a pre tournament camp, and they only had days to come together as a team.

“You compare that to the other teams there. I know the South African side had been playing for a year together; the Great Britain team had spend two years together. That’s what made this bronze medal so amazing. The players bought into our system of play and they were rewarded. The medals will be something they’ll cherish for the rest of their lives.”

Koch said the talent level of his side was comparable to a lower-seeded NASL squad; and he said they were in tough when playing the talent-laden American and Argentine sides.

Canada’s men finished second in a group that included Argentina, Chile and Venezula. The quarter-final saw Canada dispatch Brazil, 1-0. After a 5-0 loss to the United States in the semi, Canada took bronze with a 3-1 win over Mexico in the third-place game.

The women’s team was spurred by Brie Shaw, the Queen’s University captain who had been with the Whitecaps’ ladies program before it was scaled back and taken out of the W-League; Sam Rose, who plays in the U.S. at Bates College (and is Brad’s sister) was also part of the women’s squad.

The Canadian women finished their round robin with a 3-1-2 record, which put them into the third-place game against Australia. On the women’s side, the teams that finished first and second in the round robin contested the gold medal game (where the U.S. beat Israel) and the third- and fourth-place teams played for bronze. Canada beat the Aussies 3-0.

But coach Menashe Levi, who was at his fourth Maccabiah Games (two as a player), said he felt the Canadian side deserved better. In the round robin, Canada actually held a late one-goal lead on the Americans, a side filled with NCAA stars. How good were the Americans; they beat the Israelis 7-1 in the gold-medal game, even though the tournament hosts used players from its U-19 side peppered with members of the senior national women’s side.

“The official indicated that there would be two minutes of added time, and there ended up being four,” said Levi. “They scored two-and-a-half minutes into extra time. We stayed with them the entire game. We wanted to get into the gold-medal game so we could get another shot at them. I felt that we were probably the second-best team in the tournament but, the way it broke down, we ended up playing for third.”

Levi began scouring the country for Jewish soccer talent two years ago. A year ago, he had assembled the core of the team. They spent five days together before leaving for Israel.

“Considering that we did not have a lot of preparation time, our result was excellent.”

At the U-18 level, Canada beat Brazil in the third-place match by a 2-0 count. Alexandra Magonet finished tied for second in the tournament scoring race — she scored four times. Alexa Quint scored twice in the third-place game, and Jessie Faber also stood out.

The U18 team stayed in Israel six days longer than the senior teams, so the kids could soak up the culture of the country.

“To be honest, it was one of the best experiences of my life,” said coach Laura Arduini. “To be with the junior players, to experience the country, it was really exciting. I learned a lot about the country and its history. It’s so beautiful.”

Of the 16 girls on the team, 14 were accompanied by family members; which meant plenty of support when the team went on the field. Arduini said her team’s level would be about the same as a club going to Ontario provincials; but, both the American and Israeli teams were stacked. In fact, Israel entered its U-17 women’s team into the Games.