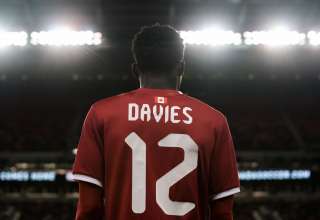 With the sale of Alphonso Davies to Bayern Munich, the Vancouver Whitecaps will be able to keep almost 100 per cent of the 13 million-Euro (that’s $20 million, Canadian) proceeds because the Canadian teen is recognized as a homegrown player by MLS. That is, he was brought up through the Whitecaps Academy after the MLS side scouted Davies in Edmonton. Davies got his professional debut with the Whitecaps.

Under MLS rules, despite the whole central-control-of-contracts thing, if a player is homegrown, a team doesn’t have to pay tribute to the league if said player is sold. The money is the Whitecaps’ to use, though there are some mechanisms in place on how that money must be spent.

Now, Bayern will need to pay some solidarity money to the clubs Davies played for in Edmonton in the couple of years before he left the Alberta capital for Vancouver. By FIFA rules, when an international transfer is reached, Canada Soccer must send Bayern a detailed list of all the clubs Davies has played for since he was 12, and Bayern must ensure those teams get solidarity payments. A lot has been made about deals with American MLS teams and them not passing solidarity payments down to youth clubs. That’s not the case in Canada. So, Edmonton Strikers, the cheque should be in the mail come January.

Now, the question. Will Free Footie get a payment? The Edmonton program, founded by Tim Adams, began as an inner-city initiative to give disadvantaged kids — many of them migrants — the chance to play organized soccer free of charge. It was through this program that a kid named Alphonso Davies blossomed. That’s where he started to turn people’s heads — in a program that brought many refugee kids together to play the sport that they loved. In North America, where we hear more and more about pay-to-play academies and the rising costs of enrolling your kids in sport, this grassroots initiative is a refreshing reminder about the reasons we want our kids to play; to build friendships, learn about teamwork, become more well-adjusted.

“I’ve know for a long time that a day like this would happen,” Adams said. “The first time Alphonso stepped on the field, we knew he was special. We simply provided a platform where he could be seen.”

Free Footie goes up to Grade 6 level. After that, Davies went to St. Nicholas Junior High, a school known in Edmonton for its soccer program. Adams wonders if Davies hadn’t had the chance to play in Free Footie, would he have been seen by the coaches at St. Nick’s?

(We’ve written about Davies and Free Footie in the past.)

Adams is taking a break from his work at CBC in order to take Free Footie outside of Edmonton. First, he wants to spend the next year improving Free Footie in its hometown; while the Davies story is an amazing one, Adams feels that a few other kids have slipped through the cracks, kids that had the talent to rival Davies, but they didn’t get the support they needed. He wants it so Free Footie offers a clear pathway for kids who are exceptional to get to the next level. He doesn’t want to see any more exceptional talents get missed because they’re immigrant kids and don’t have access to the Canadian development path.

From there, he wants to establish Free Footie not only across Canada, but in all the host cities for the 2026 World Cup — so, the United States and Mexico as well.

“I’ll say this, that I think there’s an Alphonso Davies in every Canadian city. I guarantee that.” he said.

Adams believes the Canadian national team can parallel the French team that won the World Cup; by being welcoming to refugees, we can show that diversity is a strength.

“Alphonso’s story highlights some of the best things about Canada,” Adams said. “A refugee comes to this country and is given the chance to succeed and then, well, goes on to put on a Bayern jersey.”

So, even if Bayern doesn’t owe Free Footie any solidarity money, you’d hope that MLS or the Whitecaps or Bayern would see the PR value in making a significant contribution to Free Footie’s expansion.

Without Free Footie, does the Davies story happen? Sure, his talent is out of sight, but would he have got the chance to showcase it at such a young age? But Free Footie isn’t just about a budding superstar like Davies, it’s about the sense of purpose, the sense of community it gives to kids, many of them new to Canada. Through soccer, the world’s game, they can feel grounded in playing something familiar.

So, when the Whitecaps call Davies “homegrown,” take that term with a bit of a grain of salt. If Free Footie isn’t mentioned in the press releases, if it’s not mentioned in the thinkpieces that will be written about the Davies transfer, well it’s a grand disservice to a great organization. With Free Footie looking to expand, and the Davies story reaching new levels of interest. It’s important that everyone in Canadian Soccer talk about the two hand in hand. Because we can make the argument that it was the day that Davies joined Free Footie that the destiny of Canadian soccer was changed.