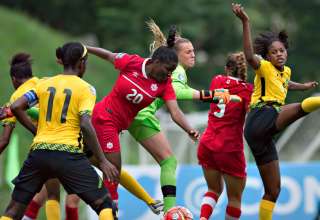 The U-20 team qualified for the Women’s World Cup; but was youth really served by the decision to rest key players for the final game of the CONCACAF Championship?

In the post-match press conference after Canada eked out a spot in the 2016 FIFA U-20 Women’s World Cup, Head Coach Danny Worthington gave an early hint that a goalkeeping change was in the offing for the final against the United States.

Up to that semifinal win over Mexico in penalties after a 0-0 draw, Canada hadn’t conceded a goal in the CONCACAF U-20 Championship through three group-stage games and the semi that went 120 minutes. But talking about his two goalkeepers in Rylee Foster and Lysianne Proulx after the semis, Worthington said “you’ll see (Proulx) as well” before hesitating, perhaps aware that he was tipping his hand a little bit ahead of the final.

Foster hadn’t conceded through two group stage games and the semi, and pulled off a save in penalty kicks that helped Canada to the win.

Still, there was a feeling that this was Foster’s tournament to see out and when the starting XIs were announced before the final, it was a surprise to see that Proulx was starting. She’s a goalkeeper with immense potential who had already seen the field in the final group-stage game against Honduras and should be the Canadian goalkeeper next March at the CONCACAF U-17 Championship in Grenada.

But with Canada prioritizing youth not only in this tournament but December’s Natal tournament in Brazil with the senior team, the staff wanted to give as much experience to as many players as possible.

“It’s not about [Foster] and it’s not about [Proulx],” said Worthington. “It’s about the women’s national-team program and increasing our positional threshold and you don’t do that unless you give kids a chance in big games and that’s what we did and we did that as a staff and we stuck by it when we made that decision.”

While the Canadian program plays the long game in the hopes that players will thrive internationally when they reach the senior stage, that philosophy would be small consolation for Foster, who kept the sheet clean in three games. She was stone-faced as she left the field at the Estadio Olimpico Metropolitano on the final Sunday as she had perhaps missed out on the Golden Glove by virtue of her missing the final.

This isn’t to denigrate Proulx, but it would tough to be in Foster’s shoes after everything she’d done in the tournament, then miss the final due to rotation — and see the backup as a focal point of the decisive goal in the final.

Worthington was careful in sticking to his messaging after games but as Canada looks to develop “tournament experts,” as they’re always keen to say in public, there’s one part that’s potentially overlooked — the importance of winning competitions.

Foster was in goal in 2013 when Canada lost to Mexico in penalty kicks at the CONCACAF U-17 Championship and won’t get another crack at experiencing a final at the youth age while Proulx has a CONCACAF Championship at the U-15 level and still has plenty of time to get games internationally at the youth level.

That matter shouldn’t distract from the good work that was put in over the course of the tournament by Worthington’s staff, that was by all admission, working with a very young team.

The roster in Honduras was missing some influential names like Jessie Fleming, Gabrielle Carle and Marie Levasseur and included two 15-year-olds and three 16-year-olds who have already shown that they’re the measure of teams in the CONCACAF region and still have a number of U-17 and U-20 cycles ahead of them.

“You saw them grow. Coming into this we had three camps and we’ve got a curriculum that’s delivered over the U-15, U-17, U-20 and the senior team,” explained Worthington. “I had the beauty of bringing them together and perform as a team. What you did see, if you looked in the lineups we put out is that we defended in two to three different ways in their half. We defended in our half in three different ways.”

Another common mantra of the women’s program under the guidance of John Herdman is that the objective is to produce “more Sinclairs more often” and the quest continues as, apart from one game against Jamaica, Canada didn’t really overpower their opponents.

The Canadians were comfortable in the opening game win against Trinidad and Tobago but they also missed quite a few chances that they were able to create.

Taylor Pryce did well to get into quality scoring opportunities but wasn’t clinical enough.

It would seem that when the U-20 World Cup rolls along next year, Levasseur holds the advantage when it comes to who will lead the attack.

That said, for much of the tournament, Canada remained very organized not only at the back but showed poise in constructing attacks and creating chances and were hardly troubled by any of the group stage opponents and Mexico never looked like they were going to score.

In the final, the Americans were dangerous but in the end, it was a Canadian mistake that gifted the opportunity that Ashley Sanchez took to give claim the U.S. its fourth straight championship at the U-20 level.

“Tactically we were sound,” Worthington said of the performance in the final, which really could have applied to the entire tournament with the team really buying in. Finishing was really the main concern but, as is often the case, the team did create chances.

Worthington and U-17 Head Coach Bev Priestman are following the roadmap established by John Herdman (with Herdman also joining in the youth parade with so many young players in with the senior team in the tournament in Brazil).

And while it can be appreciated that you want young players to get international experience at an early age and give them as many games as possible at that level—there ought to be a level of flexibility when it comes to tournament finals. In the final, you want your best players knowing what it’s like to win under the biggest pressure.

The ultimate sign of the tournament expert is someone who can step up in the moment and win the big game. Just qualifying for the next stage ought to just be the beginning but silverware is the ultimate standard.