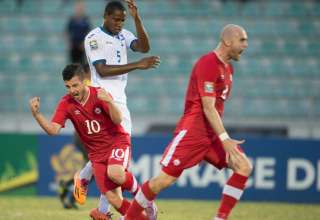 Marco Bustos (10) celebrates a goal against Honduras during the CONCACAF U-20 Championships in 2015. PHOTO: MEXSPORT/CANADA SOCCER

When he first arrived in Vancouver, Marco Bustos was a homesick teen. After a few months in the Whitecaps Residency, he was told by the club to get his act together. Now, years later, he is one of the Whitecaps’ brightest prospects…

Growing up in Winnipeg, Marco Bustos shared the same dreams of many young Canadian players: Work hard, impress the right people and, maybe, one day play in Europe.

But it was very much a dream, the odds against him monumental and there were days when he wondered to himself, “what am I training for? Men’s league?”

It was a legitimate question to ask, in a country with no top-tier professional soccer league or teams.

But then, the Canadian soccer landscape slowly began to shift. When Bustos was just about to turn 11, Toronto FC played its first ever Major League Soccer match. Four years later, he was signing terms as part of the Vancouver Whitecaps’ first ever full residency program.

But it wasn’t necessarily a direct Winnipeg-to- Vancouver journey. Bustos credits Vancouver’s interest to a 10-day training stint he had with English giant, Liverpool in November 2010. Left-footed, a creative No. 10 who can also play on the wing, the diminutive attacking midfielder stuck out as a different sort of Canadian player.

“That was a cool experience, an experience not many guys get to have at my age,” Bustos tells me, sitting at a coffee shop patio on Vancouver’s Cambie Street just outside the downtown core. “I came back and I kind of knew if I wanted to play at this high level, what I kind of had to do. When I came back, it was big news throughout Canada that I had gone.”

So the Whitecaps decided to have a closer look at this player who had caught the eye of scouts on Merseyside, inviting him to a 60-player combine to evaluate players ahead of the club launching its residency program.

“I ended up being one of the 30 kids who got signed out of 60,” says Bustos. “They sent me an email, saying, ‘we want you as a full ride to be in this residency program, fully funded.’

“It was a big step for me, for me as well as my parents, letting go of taking care of me at a young age. So, at 15, I moved over here with a billet family.”

Bustos is frank about his initial experiences, saying the first four months were particularly tough, with serious bouts of homesickness as he missed his friends and family back in Winnipeg.

“It really showed, and it showed on the field as well,” says Bustos. “It showed that I wasn’t really happy and all that. It affected my performance for sure, and it limited my game time at the time. Going back at Christmas time, we had about two weeks off, and they told me, you’ve got to pull things together.”

On that trip back home to Winnipeg for Christmas, Bustos came to a harsh realization about his hometown.

“When I went back home, everyone was fine and everything was OK, seeing my parents and my friends, but saying to myself – here in Winnipeg, there’s nothing for me if I want to reach my goals,” says Bustos. “Being a guy that’s really family-oriented, I needed to sacrifice that. I came back with a whole new attitude, and I think that’s what really changed my mindset to becoming a professional soccer player.”

The next big step for Bustos was getting a chance to play with older players in the Whitecaps system. At the urging of Gordon Forrest, then working as a coach within the residency program (now an assistant with the MLS side), Bustos was lifted from the U-16 group to play with the U-18s.

“All of my life, I’ve played years up,” says Bustos. “When I was 13, 14, I was playing with men. It was nothing new coming here and playing with older players, but obviously it’s a different level. It was good to see how I’d go up against older players at this level, and for me to learn from them, and then it made it not as difficult going into the first team. I was able to shine a light on myself in first-team training sessions and be different than anyone else.”

Bustos’s involvement with the Whitecaps attracted national team scouts – he would represent Canada in the 2013 FIFA U-17 World Cup. Then the following year, he would court controversy, accepting a call up to a Chile U-20 squad after Whitecaps Designated Player Pedro Morales, himself a Chilean international, put in a good word.

Bustos, the son of a Chilean father and a Canadian born mother of Italian descent, is unapologetic when pressed on that decision.

“For me, it was a no-brainer for me to take that opportunity,” says Bustos. “I know other Canadians behind the scenes, fans, didn’t really like it. But, for myself, I knew I had to do it.”

As for why he eventually opted to stick with the Canadian program after that 10-day camp in Los Angeles with Chile, Bustos admits pragmatism while also hoping he can be a part of bringing his birth country back to a World Cup.

“What really came through my mind was, playing for Chile would be out of this world,” says Bustos. “But I knew, playing for Canada, I had a better chance. What it came down to, was, this is the country I was born in. We haven’t gone to a World Cup in a long time. We haven’t gone far in international competitions in a long time. I wanted to contribute to this country. With the youngsters coming up now in my generation, I think we can push now for this country to get to a World Cup.”

The first hints of making the crucial breakthrough at club and international level came last season, in a whirlwind 24 hours. Bustos received his first senior cap in a friendly against Ghana on October 13, 2015 in Washington, D.C., before coming off the bench for his club debut the following evening against FC Dallas in Frisco, Texas.

He also played in this year’s Amway Canadian Championship.

“He’s at a pivotal point in relation to his development,” says head coach Carl Robinson, speaking with me in the stands at a Whitecaps FC 2 match at the University of British Columbia. “He’s on the MLS roster, which for a player of that age, isn’t common in the league. But he has to find a way to get into the 18 on a regular basis. With that, comes consistency. He’s got a lot of talent, a lot of potential, but there’s a number of players that have potential that don’t go on to fulfill it.”

Robinson goes on to say he’s seen an improvement in Bustos’s attitude in recent months, before expanding on the challenge every club faces when dealing with talented young players.

“Sometimes they believe their own hype, which is not a good thing,” says Robinson. “What we need to do is, make sure that they remain confident, these good young players, but they keep their feet on the ground.