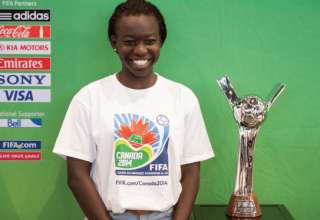 Sitting in the locker room of the Canadian women’s national team, 17-year-oldSura Yekka has her headphones on, listening to her own tunes while her teammates play outdated music.

She and her teammates are preparing for another friendly, another chance for Yekka to tune up ahead of the U-20 Women’s World Cup, then, the Women’s World Cup. But Yekka also has her chemistry homework in front of her. Staff members on the national team help her develop her game — and finish school assignments.

This is the life of a high-school soccer player playing on a national-team level.

There are few players in Canadian soccer who have enjoyed as meteoric a rise as Yekka. The teenager is quickly becoming the most-talked- about player in the women’s game, and for good reason.

“She was a real bright spot,” Canadian women’s national team head coach John Herdman said of Yekka after her second cap with the national team, back in November of 2013. “If anything, she was pretty much showing the way in terms of a real positive attitude in terms of taking it to Mexico. I think a couple of players fed off her energy. I think that was a real bright spark.”

Most girls her age are battling it out on the provincial level, but Yekka has enjoyed a rapid entry to Canada’s senior team. It makes her story a rare one in the world of professional soccer, but it’s also a story that starts off the same as many others.

Yekka started soccer as a child; she says that her parents put her into the sport just to keep her active at first, before she fell in love with the game. Her first club was North Mississauga SC, but Yekka made her name at Brams United, a team playing in Brampton, Ontario, a suburban city in the Greater Toronto Area that’s known for being a hotbed for Canadian men’s talent, from Iain Hume to Paul Stalteri to Atiba Hutchinson to Doneil Henry.

In 2012, at 15 years old, Yekka got her start in Canada’s youth program in a training camp under David Benning, who had coached her on a provincial level beforehand. That camp turned into a spot in the U-17 team, which quickly moved her into the senior team spotlight.

Ready to be a Wolverine

She is committed to the University of Michigan and says she plans to attend in the fall semester of 2015. Her speed makes her an asset at fullback, a trait she honed while competing in track and field in 2010. It didn’t take coach Herdman long to pull the trigger and call her into the senior roster. She made her debut on October 30, 2013 against South Korea in Edmonton.

An age-appropriate spot in the U-17 Women’s World Cup, held earlier this year in Costa Rica, tempered her sudden rise to the top. Facing one of the toughest groups with Germany, Ghana and North Korea, Yekka recalls that the Canadian team’s only goal was getting out alive.

“When we first saw the draw for the group stage, we were kind of like, doubtful,” Yekka says. “We didn’t know how we would do. The fact that we got out of the group without a loss to those really difficult nations was completely awesome. We were all excited with how we did and how we played, and it was a great learning experience for us. It built up our confidence, too.”

In the first match, Canada took an early two-goal lead over Germany, but conceded twice in the second half, settling for a 2-2 draw. Another tie, this time against North Korea (1-1), meant Canada had to defeat Ghana to advance. The Canadian girls came through with a 2-1 result, finishing second in the group and knocking Germany out in the process.

Canada opened the quarterfinal round against Venezuela, but lost the game 3-2.

“It was very disappointing,” Yekka recalls. “We wanted to be the first team to get out of the quarter-finals and make it to the last round of the tournament. That was our goal.

“No one expected us to get out of the group stage. We were happy with that, but it was still bitter losing in the quarter-final match.”

For some players, a U-17 World Cup can define their teenage years, but Yekka could add two more major notches to her belt before she even turns 19; she’ll be playing in the U-20 World Cup hosted by Canada in 2014, and is a strong contender for a spot in the FIFA Women’s World Cup (also hosted by Canada) in 2015.

Is it a case of too much, too soon for Yekka?

Right now, her focus is on the U-20 World Cup, which kicks off in August. Yekka has yet to even practise with the U-20 team, since she has been with the senior roster this year. Two of the group stage games will be played in Toronto at BMO Field, and Yekka says she is excited at the chance to play in front of friends and family.

Still, no player can help but dream of hoisting the big prize, and it’s the Women’s World Cup that has Yekka dreaming.

“I remember when I heard that we were going to be hosting the Women’s World Cup, I was telling my friends, ‘oh my God, we have to go watch the games!’ Now, all of a sudden, I have a chance of possibly participating. It’s just crazy.”

She’ll be kicking it alongside some of the biggest names in Canadian soccer, including Canadian all-time leading scorer Christine Sinclair, who Yekka says is even better to watch in person: “I thought she was good, but once you play with her, you realize she’s the best.”

Rhian Wilkinson, a fellow fullback, is another teammate.

Yekka notes; “she’s taught me a lot and I give her a lot of credit in helping me improve.”

Having those role models while still in high school has been instrumental in her development as a player. But, each trip to exotic locations like Brazil and Costa Rica has made her more of a footballer than a student, something her friends at in Grade 11 at Our Lady of Mount Carmel Secondary School like to tease her about.

“My friends always joke, whenever I come back, ‘oh, when’s the next time you’re leaving, when are you going to be gone?’ because they’re used to me being gone,” Yekka says. “Everyone’s excited for me. Some people watch the games on TV even if they barely watch soccer, just to see me play.”

Her star continues to rise steadily, and while she’s not a household name like Sinclair just yet, she certainly is on the right path. Where does this young star see herself in five years’ time?

“Hopefully, playing professionally,” Yekka says. “And hopefully I’d have some kind of medal from the Olympics or the World Cup here in Canada. The Vancouver Whitecaps, I know, have a women’s program, and it would be awesome if Toronto FC could have one and be in the NWSL. That would be great.”