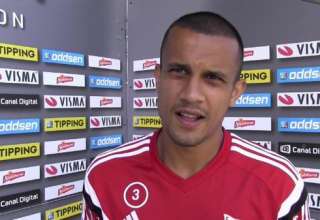 It’s amazing just how small the soccer world can be.

Before his arrival on Thursday, new FC Edmonton left back Netan Sansara had never been to Canada. But he did have some sort of idea of what his new club would be about. Why? Before coming to Edmonton, Sansara was the captain of Norwegian side, Fredrikstad. Canadian national teamer Adam Straith and Sansara played together in Norway. And, through Straith, Sansara got the e-mail address for Canadian national team and FC Edmonton midfielder Nik Ledgwerwood, and they started exchanging messages.

Oh, and while Sansara had never been to Canada before, his mother has — they have family in Calgary who are in the restaurant business.

So, he’s not arriving in Edmonton, to a new club and country, as a complete stranger.

Sansara said that, after speaking to FC Edmonton coach Colin Miller, he knew the Eddies’ contract offer was the one he was going to accept. He was announced as a new Eddies’ player Thursday morning, and arrived in the city late Thursday afternoon.

“To be fair, I had three or four offers in Scandinavia,” said Sansara. “I had one more from abroad. “But when I spoke to Colin, I knew that he understood how I was thinking, and I got a good understanding of how he works.”

Sansara said he wants to spend a lot of his first full day in Edmonton… training.

“They don’t allow players with dual passports to play for the national team in India,” said Sansara. “They only allow players who have a single passport, so that’s where things are right now. They say they want to improve in World Cup qualifying, and Asian Cup qualifying, and I know there are many players around the world with Indian heritage who could help the program.”