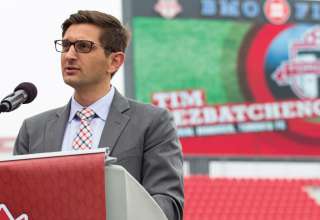 Greg Vanney is Schrodinger’s cat. For those unfamiliar with Erwin Schrodinger’s famous paradox, an object can theoretically exist in multiple states at once until the moment it is observed, such as how a cat sealed in a box with a poisonous booby-trap could be considered to be both alive and dead until the observer actually opens the box and checks on the cat’s status.

The remaining weeks of the 2014 MLS season are essentially Vanney’s box. Until Toronto FC’s postseason status is determined, the newly hired Vanney exists in a strange limbo as either “the best coach in Reds history” or just another name on the long list of failed TFC coaching tenures. If he gets TFC into the playoffs for the first time in history, he’ll be hailed as a hero and will be on the sideline for First Kick 2015. If he doesn’t, he quite possibly gets fired as part of yet another TFC management shakeup and the club will again start from square one.

With this in mind, Vanney’s blueprint for how he wants his players to approach their duties on the pitch could easily double for how he is approaching his opportunity as TFC’s boss.

“My message to the guys is that we’re not looking at the [rest of the season], we’re looking at the first 15 minutes of the next game; let’s get ourselves straight and have a good start, get through the first 15 and then we’ll settle in a little bit and know what our objectives are,” Vanney says. “Then we look at the first half, making sure we do all the things we need to do in the half. We just continue to build on it, build those little success moments… if we do more good things than bad things in each half, there’s a good chance we’ll do well in the end.”

It would be hard to blame Vanney if the Reds did indeed fall short of the playoffs, given that he’s been given a roster with several key injuries and a back line that looks to be deteriorating with each passing match. Perhaps Vanney will perform well enough in his coaching audition that he and general manager Tim Bezbatchenko last into 2015, or at least until Maple Leaf Sports and Entertainment hires a new president/CEO to replace the outgoing Tim Leiweke.

Of course, that situation would make Vanney and Bezbatchenko into virtual lame ducks to be sacked at the first sign of trouble by a president who would want to hire his own people —- just as Bezbatchenko inherited Ryan Nelsen as head coach and eventually fired him, or as Leiweke fired inherited general manager Kevin Payne.

In that case, the 2015 season could probably be written off as another transitional year due to continued inability from management to get on the same page.

No scenario is too outlandish to imagine given Toronto FC’s borderline farcical managerial history. For comparison’s sake, the New York Red Bulls and Chivas USA have each had 10 different coaches, the most of any MLS sides. TFC, however, is 11 years younger as a franchise than New York and two years younger than Chivas, yet the Reds are already on their ninth head coach in less than eight seasons. The other two franchises also have the excuse of ownership changes for their instability, while MLSE bears the full brunt of responsibility for TFC’s coaching carousel.

In fairness to Vanney, it’s presumptuous to just assume that his ride on the carousel is almost up. Amidst the tumult of Leiweke’s pending departure, Nelsen’s sudden firing, the Jermain Defoe transfer rumours and the club’s struggles on the pitch, Vanney believes TFC can benefit from adding his fresh voice to the mix.

“For me, in terms of the pressure, I’m confident in where I want to take the team, the things that we want to do,” Vanney says. “I know we have a short window of time to try to accomplish it this season, but for me, my personality is pretty relaxed in general… My personality fits in pretty easily with the group but at the same time we have a standard that we need to get to quickly.

“I find I don’t get caught up in the pressure of the situation.If I get wound up, that’s going to wind them up and that’s not good for anybody. I’m in confident in where we’re going and we just have to keep working.”

Vanney joined the Reds as Bezbatchenko’s assistant GM and the TFC Academy director last December, and he has a decorated résumé as a multiple-time MLS all-star defender, United States international, Chivas USA assistant coach and academy director with Chivas USA and Real Salt Lake. The hiring, however, continues TFC’s seeming aversion to hire coaches with any experience running MLS teams or even senior team soccer. Only Preki (107 games) and Mo Johnston (15 games) had ever run an MLS bench before taking over as TFC’s head coach. Chris Cummins, Nick Dasovic and Aron Winter all had backgrounds in academy soccer, plus Dasovic had been an assistant for several of Canada’s teams and the head coach of the U-23 team. eyond them, John Carver and Paul Mariner had cups of coffee running English clubs and Nelsen infamously went right from the Queens Park Rangers’ back line to Toronto’s top job before he’d even acquired a coaching licence.

Dwayne De Rosario, with slightly less than three full years with TFC to his credit, has played under seven of those coaches. He declined to comment on why the Reds’ job is so hard on coaches, though he noted that the players were doing their best in the transition.

“It’s a tough position to come in at this stage, every other team is in full swing… while we’re kind of not reinventing the wheel [tactics-wise] but changing things a little bit,” De Rosario said. “We’re professionals, we’ve been through it before, whether it’s playing for a new coach or going to another team and having to adjust.”

It’s been an overall peculiar mix of placeholder assistants, inexperienced former players with ties to major European clubs and, most damningly, coaches who never worked as head coaches in MLS again after leaving the Reds (Dasovic is currently an Earthquakes assistant). If Toronto FC is the top-tier franchise that MLSE and TFC management so often claim it to be, one wonders why it’s been unable or unwilling to attract premium coaching talent to run the team.

It could be that a big-name coach who wants firm control over personnel and management decisions is simply too frightening a concept for MLSE executives who are notorious for meddling with their sports teams. Furthermore, if you’re a distinguished coach with the luxury of having job options, what does the Toronto job have to offer beyond a large paycheque?

After ignoring proven MLS coaches in favour of “project” coaches when this club was seen as a sleeping giant in its formative years, the Reds’ futility may force them to stick with projects since no big-name coaches will want the gig.

The Vanney era got off to a sour beginning for TFC, as the team continued its late-season collapse by suffering two shutout losses to the Philadelphia Union within a four-day span. Despite the number of games left to play, the events of the last few weeks have created a snowball effect that will leave the Reds again heading into an offseason looking for answers.

Forget Schrodinger’s cat — the TFC supporters’ belief in its team may already be on its ninth life.

(Tim Bezbatchenko declined to be interviewed for this piece).