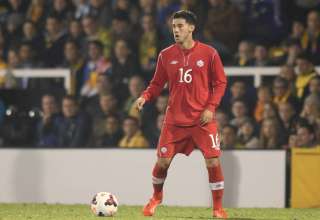 Thanks to a slew of new signings and culling of Canadian players from the first-team lineup, Jonathan Osorio is now the only player from this country who can realistically hope for a regular starting job on Toronto FC…

After eight seasons without a postseason appearance, there’s no question that roster construction has been an issue for Toronto FC. Yet, as the club continues to look for the elusive mix of talent that can deliver a winning season, one specific type of player seems to becoming less of a necessary ingredient for the Reds: The Canadian.

This past winter saw TFC part ways with Doneil Henry, Kyle Bekker and Dwayne De Rosario, who combined for 36 starts and 3,425 minutes in 2014. This leaves Jonathan Osorio as the only Canadian player slated for a starting job on this year’s TFC squad, and he’s happy to embrace being the domestic face of the club.

“It’s a role I’m more than willing to take on,” Osorio says. “It’s an honour….There’s not as many [Canadians] as in past years and I like taking that pressure onto my shoulders.”

Though the Reds added several midfield and striking options during the offseason, there’s little doubt that Osorio will continue to be a key figure for this year’s side. On paper, he’s the prototype of what Toronto FC promised to deliver en masse to Canadian soccer when it first joined MLS: The local kid receiving a chance to play and develop his career at the top North American level.

The catch is, however, that Osorio originally received his opportunity in large part because the 2013 Reds were in the throes of a rebuilding project. During the Tim Leiweke/Tim Bezbatchenko era, “rebuilding” has been replaced by a more aggressive pushes to become an immediate contender.

This means more established names coming into the club, leaving the other six Canadians on the roster (four-year veteran Ashtone Morgan and TFC Academy products Manny Aparicio, Jay Chapman, Jordan Hamilton, Chris Mannella and Quillan Roberts) only in line for significant playing time if something goes awry with one of the first-choice options.

Bench jobs are nothing to sneeze at, and there’s a solid chance at earning a larger role should TFC’s history of injuries and underachieving starters continues. Chapman, in particular, turned heads after an impressive preseason and likely won himself some extra substitute minutes.

That said, Canadians as bench depth represents a marked change from how domestic players were highlighted during TFC’s first several seasons. Between the red uniforms and the likes of Jim Brennan, Julian de Guzman, Terry Dunfield and Dwayne De Rosario on the pitch, it was easy to mistake TFC for Canada’s men’s national team during the team’s early days.

Of course, those initial TFC teams also weren’t very good. While the Canadian content was hardly the issue with Toronto’s lack of success either then or now, eight years of losing teams has increased the pressure on management to acquire players who can simply deliver, regardless of national affiliation.

“As a proud Canadian I want to see Canadians on TFC and doing well. That being said, in the past I think we’ve put an emphasis on having Canadians to the point that it maybe negatively affected the team,” says Phil Tobin, president of the Red Patch Boys supporters’ group. “We’ve drafted Canadians and put this emphasis on Canadian players, and they simply don’t seem to materialize in the roles that we imagine them in.”

National pride was a major part of TFC’s launch as Canada’s first MLS franchise, yet that branding focus has shifted to positioning TFC as players on the worldwide stage. De Guzman remains the only Canadian Designated Player in Toronto’s history, as the Reds have since signed DPs from other countries, a strategy that Tobin points out is an MLS-wide trend.

(Of course, Altidore and Bradley, because of their American passports, are treated as domestic players on TFC.)

Obtaining elite Canadian talent, naturally, is easier said than done. For fans of both Toronto FC and Canada, however, the franchise’s struggles have been doubly frustrating; it would be one thing if TFC not playing Canadians was leading to good results on the pitch, yet that clearly hasn’t been the case.

Toronto’s management turmoil has also undoubtedly played a role in the lack of a steady domestic talent pipeline. Of the many former general managers and coaches in the Reds’ short history, only two (Earl Cochrane and Nick Dasovic) have been Canadian, and both only served on interim deals. This front-office instability has also filtered down to the TFC Academy, which has had multiple directors and multiple different philosophies since its inception.

Greg Vanney’s move from Academy director to head coach could signal more cohesion between the MLS roster and its prospects. It could be argued that, with the establishment of the Toronto FC II reserve side in the USL, the Academy has only now put a proper developmental structure in place. Since Vanney knows as well as anyone what Chapman, Hamilton and the other young Canadians bring to the table, he is theoretically the ideal person to oversee this next stage of their growth as footballers.

“In the Academy, time is on your side. Players don’t have to be exactly ready every single day,” Vanney says. “They’re about a projection that’s two, three or five years down the road and it’s not necessarily about every weekend’s performance. Sometimes you’re exchanging performance for learning. But, here, results are the name of the game and the key is that they’re ready to perform every single weekend.”

As with so many of the Reds’ problems, simply keeping the same management in place for longer than a season or two could do wonders for finally turning the TFC Academy into an important talent source for both the club and the national team. Despite just a minute of MLS action between them, Hamilton, Aparicio and Mannella have all received senior team international caps within the last six months, so they’ll need regular playing time (likely in the USL) to remain as options for Canada.

Yet not even the hardest of hardcore national team supporters wants to see Canadians playing just for the sake of playing in MLS, nor is anyone claiming that TFC should be fielding an all-Canadian starting XI.

It can only help both club and country, however, if more of a balance can be struck between the homegrown Canadians and the internationals on the roster.