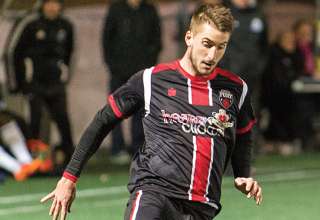 At the end of the 2013 USL-PRO season, Canadian Philippe Davies had made up his mind. He was going to hang up the cleats. Disillusioned, he was ready to give up the game less than two years after playing in Canada’s Olympic program. Then, he got a call from Ottawa Fury coach Marc Dos Santos, and everything changed…

But, before he could make his retirement official, he got a phone call that would convince him to change his mind. Marc Dos Santos, the coach of the Ottawa Fury, wanted Davies to join him in the nation’s capital. The Fury was set to begin NASL play in 2014, and Davies was a player that Dos Santos had identified back in July of 2013 as someone that should be an important part of the squad.

After spending the 2011 MLS season with the Vancouver Whitecaps, but never getting into a game, then two lost seasons in the third-tier USL, Davies finally had someone who believed in him.

The early retirement plans were cancelled.

“I can’t believe that any of the other Canadian clubs would not pick him up,” says the Fury coach. “I felt that we had to snap him up before any of the other Canadian teams would. He was with the under-23s and, while he’s older now, he was one of the best players in that group. Let me tell you, Philippe Davies is a soccer player. He’s very good in possession and he’s got an excellent soccer sense. Sure, if you play a more direct style, maybe Philippe Davies is not your first choice of player. But if you want to play a possession game, if you need players who are smart on the ball, then he is a player you want on your team.”

And Dos Santos points out that Davies, as a 19-year-old, played regularly for the Whitecaps back in 2010, the franchise’s final season in the lower tiers before making the move to Major League Soccer.

Then-Whitecaps coach Teitur Thordarson had faith in Davies, and the Canadian kid was one of the few who was selected to make the move with the club to MLS. But, then he spent a year on the bench in Vancouver, and moved on to the USL.

“To be honest, if I wasn’t coming to Ottawa, I was packing it in,” says Davies. “It’s important for me to be in a good club. I wasn’t in the best situation in Richmond, that’s for sure. It’s a tough schedule in USL. Marc said to me I’m a player that needs to play one game a week, one game every five days, not two games every two days like in USL. He’s right about that. Coming into this environment was huge for me, and it worked out well.”

Last season, Davies made 19 appearance for the Kickers, but the majority of those games saw the kid from Longueil, Que. come on as a sub. He played just 659 minutes. But that was an improvement on 2011, when he was on the Whitecaps’ inaugural MLS squad, but couldn’t get into a game. Vancouver supporters beseeched the club to give the Canadian kid just a few minutes of playing time, but the calls went unheeded.

“Vancouver, my last year there, I felt like I deserved a little bit more,” says Davies. “I didn’t like how they treated me in my last year. But it’s the past. You can’t say anything about it. I’m not there now. I have to focus on the future.”

From the national U-23 side, a team that got one game away from qualifying for the 2012 Summer Olympics, to the USL, to not starting in the USL. Davies’s story is one that’s all too familiar for Canadians. Kid rises to some prominence with Canada’s men’s national side. Kid can’t find any professional playing time. By the time the player is in his mid-20, he’s forgotten.

As the interview goes on, Davies and I discuss the fate of Canadian defender Paul Hamilton. In 2012, he was named to the NASL’s Best XI. In 2014, as Hamilton turned 26, it looks as if the former CIS Player of the Year’s pro career is done. He is spending this season with amateur side Edmonton Scottish, after the Carolina RailHawks decided not to bring him back for the 2014 campaign. Had Hamilton been an American, and not counted as an import on the rosters of MLS and NASL teams in the United States, he’d continue to get offers and trials, a useful domestic player who can do lots of good things. But, for American sides, it’s hard to give away an international slot to a Canadian, even though we share our professional leagues with the United States. Canadians don’t sell tickets like Brazilians or even former lower-English-league players do.

“It makes a huge difference, you can see that,” says Davies. “How many Canadian players are playing right now for MLS teams in the United States? It’s just guys that the teams go out and pay big money for, players like DeRo [Dwayne De Rosario] when he was with D.C. But it’s tough for young Canadian players. First off, you have to be able to take one of the seven or eight international spots that those teams have and it’s tough. They should do something about it. I don’t know when, but they should.

“It’s crazy, but it’s the world we live in as Canadians.”

Look back at the U-23 side from 2012, and you wonder where a lot of these players would be without the Fury. Davies, forward Carl Haworth, plus defenders Andres Fresenga and Drew Beckie were all teammates on that U-23 side, and they’ve been reunited on the 2014 edition of the Fury.

But others from that team haven’t been so lucky. Back-up keeper Adam Janssen is now out of pro soccer entirely. Babayele Sodade hasn’t had a team since the Seattle Sounders waived him more than a year ago. Injury-plagued forward Randy Edwini-Bonsu is in Germany’s third division. Forward Evan James and keeper Michal Misiewicz are playing for small English sides that are far cries from even the Blue Square Premiership.

Davies, though, is part of a crew of players who can honestly say that their careers might be in precarious positions had the Fury not come into the NASL in 2014 as an expansion franchise. Fresenga trialled with the Vancouver Whitecaps last year, but didn’t stick. Haworth was an Impact draft choice, like James, but didn’t get a contract offer from the MLS side. Beckie was with the Columbus Crew last season but was cut after an injury-plagued season that saw him get zero first-team minutes.

And Davies rewarded his coach and teammates by scoring a goal and setting up one of Oliver Minatel’s three markers in the Fury’s first-ever NASL win, a 4-0 decision over the RailHawks. That win occurred on the turf at Carleton University — which is only a few hours from Davies’s hometown of Longueil, Que.

For Davies, being close to home, being on a team where he feels genuinely wanted… what a difference from a year ago.

“The good thing about expansion teams is that when you come, it’s because the coach wants you. When I talked to Marc on the phone, I really wanted to make this deal happen. He went through all the stuff, to talk to Richmond to try and get my transfer, and it worked out. I’m close to my family. It was a big decision. It was a lifeline, for sure.”