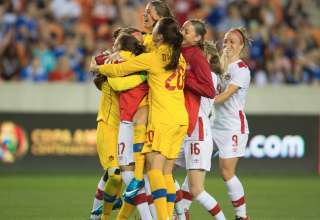 The Canadian team, featuring keepers Sabrina D’Angelo (20) and Stephanie Labbé in the back, celebrate qualification for the 2016 Olympic Games. PHOTO: MEXSPORT/CANADA SOCCER

When Erin McLeod went down with a career-threatening injury, Canada’s most-assured position — goalkeeper — became the biggest question mark heading into the 2016 Olympics. Who will emerge as Canada’s No. 1 choice heading into the Rio Games?

As the 2012 London Olympics approached, it became clear that Erin McLeod was emerging as the first-choice goalkeeper for Canada’s women’s national team. Transitioning from the time-share between McLeod and Karina LeBlanc to McLeod becoming the clear No. 1 keeper went about as smoothly as you would expect a handoff to go between one veteran to another.

As Canada approaches another Olympics, however, the latest changing of the guard between the posts is less a case of “who’s next?” as it is “who’s left?”

In the wake of injuries to McLeod and Sabrina D’Angelo, it isn’t quite how Edmonton’s Stephanie Labbé imagined rising to the top of Canada’s depth chart, but she’ll take it. After receiving her first cap for Canada in 2008 when she was still just a senior at University Of Connecticut, Labbé is now tasked with leading the national team towards another Olympic medal.

“I’m extremely excited,” Labbé said. “It’s something you dream about as a kid and it’s something I’m really looking forward to. I’m trying to not look too much at the big picture, just take it one game at a time and the best that I can, enjoy the journey and enjoy every single day that I can.”

While her international résumé pales in comparison to McLeod and LeBlanc’s 225 combined caps, Labbé isn’t exactly an inexperienced hand in goal, having amassed 30 senior caps for Canada. The first 20 of those caps, however, were spread out over seven years, so national team head coach John Herdman is getting Labbé used to the challenge of regular appearances.

“You want to get that consistency behind you as a keeper,” Herdman said. “We’re starting to get that this year, [Labbé] has had more caps thisyear than probably she’s had for a long time. These next few games, if I can keep her in net, it’ll bode well for the Olympics.”

Labbé, D’Angelo and 20-year-old Kailen Sheridan were already receiving more playing time earlier in the year when McLeod was sidelined with a right leg injury. Herdman didn’t select McLeod for the Algarve Cup, instead going with his three younger keepers in an unofficial battle to determine the backup job.

Each of the three women received one start in the Cup’s group stage, with Labbé losing a 1-0 result to Denmark and D’Angelo and Sheridan both posting clean-sheet victories. Labbé started the tournament final match against Brazil and D’Angelo took over in the second half, allowing the only goal in Canada’s 2-1 win.

With a trophy in the cabinet but the backup job still undecided, the competition between Labbé and D’Angelo (with Sheridan as an intriguing wild card) for the back-up job was expected to last until Rio before disaster struck the goalkeeping ranks.

On March 23, just 13 minutes into a match for her Swedish club team, McLeod made a seemingly routine clearance kick that could prove to be the last of her career. McLeod suffered a torn right ACL on the play, forcing her to undergo her third knee operation and sidelining her for at least one year, likely closer to two.

While McLeod has vowed to attempt a comeback, it’s a short list of athletes in any sport who have returned after three ACL injuries by age 33, so it’s sadly possible that the most-capped keeper in the history of the women’s team has worn the Canada jersey for the last time.

If McLeod’s injury wasn’t enough, D’Angelo suffered afractured wrist in late May. Her six-to-eight week recovery timeline made it possible for her to be selected for the Rio roster, with Herdman saying that he would try to get D’Angelo into one of two remaining late-July friendlies (against China and France) if healthy.

If D’Angelo isn’t ready, that will leave Sheridan as the Olympic backup. It’s a scenario that would’ve seemed impossibly far-fetched just a few months ago for the Clemson junior, who started for Canada during the U-20 and U-17 Women’s World Cup tournaments but hadn’t received a senior cap until the Algarve Cup.

“I was pretty surprised to get the e-mail for Portugal…. it was a great experience for me to come and train with this team,” Sheridan said. “It’s just another level than where I’m at in college. I got a game in, my first cap, that’s something you never forget. It’s just something you learn a lot from and can take forward in the future.”

Sheridan — currently listed as a reserve ahead of the Olympics— wasn’t exactly eased into the role, as her first game was a must-win against Iceland for Canada to qualify for the Algarve Cup final. She described the situation as “a lot of pressure” yet just being selected for a key match helped lift some of the burden, “because they believed in me to put me out there during that kind of game.”

It’s not completely out of the question that Sheridan could even be called upon in Rio, as while Labbé is far more experienced, she raised some doubts in a friendly against Brazil in Toronto on June. The Canadian team as a whole played a poor first half en route to a 2-0 loss, and Labbé was no exception; more than once, she made a questionable charge towards a loose ball and left her net open for a scoring chance.

While defensive breakdowns were more to blame than Labbé for Brazil’s two goals, Herdman’s shift in stance towards his starting keeper was telling. Just two days prior, Herdman stated that “I’m not a big fan of changing keepers prior to the tournament” and that Labbé was his first choice going to the Olympics. After the first Brazil game, however, Herdman implied that the job wasn’t quite Labbé’s to lose.

“She’s there, we have to put our faith in her. We have to keep trust and keep developing her,” Herdman said. “But, at the end of the day, this is the highest level of football….As a coach you’ve got to make a big decision. Do you keep pushing or do you keep the fight open and see who can respond well?”

Labbé made an immediate response when Canada faced Brazil again on July 7 in Ottawa. Both she (and the team as a whole) looked much more solid from start to finish, with Labbé recording a clean sheet in a 1-0 victory. It was the type of overall steady performance that makes one think Canada, at its best, is still capable of another appearance on the Olympic podium. The women faced a tough path to a medal even had McLeod stayed healthy, as goalkeeping may still be less of a problem for the team than scoring goals or getting consistent back line play.

While the team has been trying to stay competitive while incorporating the next generation of talent into the roster, losing a star and cornerstone veteran like McLeod spreads Canada’s youth movement to an unexpected position. There’s no time to dwell on the McLeod era’s possible end, however, as the Labbé era may just be beginning.

“It’s really unfortunate with injuries, that’s the [bad] luck of the game,” Labbé said. “There are things that happen but they’re totally out of your control….My biggest mentality right now is not to try to be anyone else, not to fill anyone else’s shoes, but to just be the best me that I can be. Right now I’m just trying to be the best goalkeeper I can be and the best Steph Labbé and that’s all I can do.”