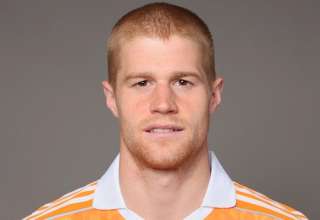 In Sunday’s first leg of the Eastern Conference final, D.C. United already held a 1-0 lead on the road over Houston. Nearing the end of the first half, DCU’s Raphael Augusto looked to be behind the Dynamo back line, but was caught from behind by Hainault. While DCU’s players and bench screamed for a foul – and a red card for a last-man-back takedown – referee Ricardo Salazar waved play on.

Hainault would go on to score the second-half equalizer and Houston went on to a 3-1 first leg win, leaving D.C. United coach Ben Olsen and his team in a rage.

But let’s head back to the call (the video is embedded below). Remember that Salazar is chasing the play off the turnover and is watching this from behind in real time.

There is no doubt that Hainault grabs Augusto’s arm and uses the leverage to pull down the forward. So, cue yet another MLS refereeing controversy.

But, wait a sec. What the heck was Augusto’s arm doing there in the first place? On first glance, you can argue that it looks like Augusto is the first player to do something illegal. He places his arm across the defender’s body, obstructing him from the ball. And then Hainault does what any clever defender would do — knowing that the arm is out there, which is an infringement, he gives it a tug.

The referee has a choice. He can ignore the fact Augusto has stuck his arm under Hainault’s — and across Hainault’s body — and call the foul and send off the defender. He can actually blow the play dead and penalize Augusto, for committing the first infringement. Or, he could do what 99 per cent of referees would do in that position, see two players both committing fouls in chasing a ball, and deciding just to let them play on.

Hainault made a clever decision — once the attacker’s arm was extended across his body, he holds it there for the referee to see.

After the match, Peter Walton, the official in charge of supervising MLS officials, was cited on the league’s official website — stating that he thought, in real time, there was a foul on Hainault. (CLICK HERE) Not sure, if I was Salazar, about how I’d feel about the head of officiating throwing one of his own under the bus without time for sober second thought. That doesn’t reflect well on MLS.