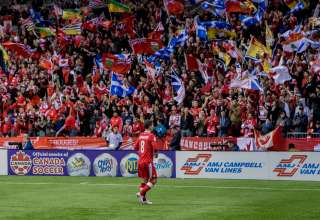 Canadian soccer supporters from across the country may soon have new clubs to follow and cheer on. PHOTO: BOB FRID/CANADA SOCCER

The Canadian Premier League has yet to be announced, but supporters’ groups across the country have mobilized in anticipation of a league we can truly call our own…

James Hutton was in a Hamilton pub with a group of fellow Toronto FC supporters when he asked if they would switch their allegiances.

“The group was a bunch of TFC fans and season-ticket holders who would meet and watch TFC when they were on away days,” Hutton said. “Rumours of a Canadian Premier League piqued the interest of a group of ours. Once this team gets going, do we support the Hamilton team over Toronto? And the answer was yes.”

There was, and is, of course, one sizeable catch.

That was more than a year ago and there is still no local professional team for them to support in Hamilton — and no league for the team to play in.

They are far from alone. As many Canadian supporters anxiously wait for scraps of news about a new nationwide domestic league, others have taken a leap of faith that the league is forthcoming.

Beyond Hamilton, supporters groups have held meetings in Halifax, Kitchener-Waterloo, Winnipeg and Regina. Moncton, Toronto, Vancouver and Vaughan, Ont. also have supporters’ groups tied to the league with presences on social media.

Rob Notenboom hosted the inaugural Regina meeting. He believes the idea is getting so much early traction because positive news is in such short supply for supporters of the men’s game in Canada.

“Everything about the league, since the first whispers of it, has tapped into this sense of desperation for a panacea. We’re all looking for something to save the situation for Canadian soccer.”

Notenboom is quick to qualify that he doesn’t believe a new league is a magic elixir for all of Canada’s footy woes, but he is excited to see how much it might help.

A little positive reinforcement can go a long way and it is no surprise then that the two cities that have had the most interaction with potential ownership — Hamilton and Halifax — also have the most active supporters groups.

In February of last year, former Canadian international John McGrane went to Hamilton city council with an “unsolicited submission” on behalf of John McGrane Services Ltd., in partnership with the CFL’s Hamilton Tiger-Cats, to put a dome over the artificial pitch of Tim Hortons Field during the winter months. The dome would create five indoor soccer pitches. One was to be reserved for a Hamilton professional soccer team in the new league.

The dome concept was defeated, but McGrane’s presentation added serious fuel to the idea that the Ticats were part of the push for a new league.

When the Barton Street Battalion let the Ticats know they existed, Kevin Matchett, whose new title with the Tiger-Cats is director of soccer business operations for Tim Hortons Field, attended their next meeting.

“That energized us to go forward and get scarves made and have a larger social media presence. If we knew that soccer was coming to Hamilton, there was no reason not to move forward,” Hutton said. “I don’t even know if we would have scarves or a web site so quickly if they hadn’t — I wouldn’t say encouraged us — but there was a natural excitement that was formed from those meetings.”

It was a similar situation in Halifax where Sports & Entertainment Atlantic (SEA) had been vocal in the media about their desire to bring a team in the new league to the city.

SEA wants to erect a temporary modular “pop-up stadium” at the historic Wanderers Grounds. The site has been a sporting venue since in the 1880s and is a across the street from Citadel Hill. It is also close to numerous pubs and restaurants in the heart of the city.

“If you asked me a few months ago if I saw myself being involved with a soccer supporters group… I would have said maybe,” said James Covey from the Halifax Wanderers supporters group. “But the way that all of the pieces of this proposal fit together so well it has me excited in a way I could not have anticipated.”

“It was really heartening to see someone with a deep knowledge of the sport being involved,” said Covey, whose group now has a logo and scarves and are preparing for SEA’s public information session on Mar. 30.

While a Canadian Premier League has obvious appeal to more isolated markets like Regina and Halifax, Hamilton does have a strong Major League Soccer team down the QEW.

“There’s a certain vibe about Hamilton where the community really sticks up for each other and that transcends not just Hamiltonians, but the businesses and the government,” Hutton said. “To have that sort of identity in a soccer team where you’re from means a lot more to me than Toronto FC. Sure they have bigger dollars and more marketing to spend, but I’m actually connected to Hamilton — and that means the world to me.”

Having a supporters group before you have a team is not unheard of — the Philadelphia Union’s Sons of Ben are a notable example — and it has its benefits.

“We’re not in debt. We have some money in the bank for tifos. We have a whole bunch of scarves, flags and a drum. We’re ready for the league announcement. If someone said there was a game in two weeks we would be ready for that,” Hutton said.