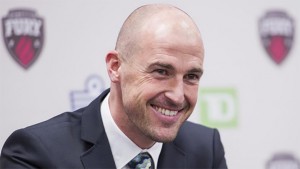 In the magazine world, try as we might to keep a lid on the things we’re working on, we’re often foiled by the daily news cycle. Today is one of those days. I interviewed new Ottawa Fury head coach Paul Dalglish a couple of weeks ago; the interview was set for the next issue (No. 8) of Plastic Pitch. But, wow, have things changed. Phillip Dos Santos in now the technical director of the Fort Lauderdale Strikers. Ryan Richter, Sinisa Ubiparipovic and Richie Ryan have all had their transfer requests approved. And the team has already lost forwards Tommy Heinemann and Andrew Wiedeman. There’s been a bloodletting in Ottawa, and it simply can’t be ignored. So, I’ve made the call to run the Dalglish Q and A on the website.

In the interview, Dalglish also addressed the plunging Canadian dollar. He said he still owns a home in Austin, Tex. and now that he’s working in Canada, he has seen his back-home expenses soar by a factor of 1.3 because of the poor exchange rate. He said that, often, when signing American players, they will have expenses back home, from student loans to car payments to housing arrangements, that are paid in U.S. dollars. So, a weakening Canadian dollar is a factor. (more on the currency issue in issue 8 of Plastic Pitch and, of course, you’ve subscribed, haven’t you?)

PP: Did you approach the Fury, or did the Fury approach you?

PD: I don’t know exactly which way around it was. I’ve had a relationship with (team president) John Pugh for a while, since the PDL days. With Marc leaving and Austin announcing that it wouldn’t be playing next year, the timing was perfect for myself and Ottawa.

PP: If the Aztex could have found a stadium, would you have stayed in Texas?

PD: For sure, I would have stayed. I’d only just started a project there. When you’re an expansion team, the first year is not about winning. It’s about laying down a foundation for the future. It’s in year two, year three, that you start fulfilling expectations and start achieving things. I’m disappointed that the stadium situation in Austin didn’t give me that chance.

PP: Officially, the USL is the third division in North American soccer and the NASL is the second division. Do you think that the NASL standard of play is better than USL’s?

PD: No. If you look back to last year, I think every single USL team beat their NASL opponents in the U.S. Open Cup. With the Aztex, we played San Antonio and we beat them. But it is difficult to compare the leagues. USL is higher-tempo, but more of a direct game. In NASL, it’s a slower pace, there’s more patience in the play. There’s really no different in terms of level, but they are very different in terms of style.

PP: Ottawa played for the NASL championship in 2015. Do you feel the pressure of building on that standard for 2016?

PD: In lower leagues, you’re always in a constant state of flux. Every year is a rebuilding year, because of the nature of the contracts in the lower leagues. You are dealing with roster turnover that’s much larger than you’d see in MLS. So, you’re not looking to build, you’re in a constant state of rebuild. But, with the players we’ve got, with the budget we have, we’ll be able to put a top-level product on the pitch. There’s a lot of pressure on me to be successful. I don’t like to be second.

PP: You played in MLS, with the Houston Dynamo, back in 2006. You’ve been on coaching staffs in MLS, at FC Tampa Bay, and in USL. Now, with NASL, do you see your job as needing to keep the team to
ever-rising standards of the league?

PD: It’s a tough one, it’s like comparing Jack Nicklaus to Tiger Woods. It’s difficult to compare teams from different generations and leagues from different years. The game continues to change, so some years will be better than
others. What I can say is that the growth of football has been phenomenal in the last 10 years. When I came to North America, there was only 12 teams in MLS at that time and the only other league we had was USL. Now we have USL, NASL and MLS is over 20 teams. I think, with all of the expansion, the players may be diluted a bit, and so the standard of play might be diluted a bit. There are only so many American players to go around, and (in NASL), you can only have seven international players.

PP: You spoke of American players, but do you plan to keep looking to add Canadian players to the team, as well?