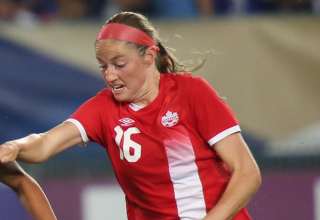 Since Canada won Olympic bronze by beating France in 2012, the four years leading up to the 2016 Olympics were simple to explain. Canada looked pretty good against the middling nations — but couldn’t find a way to beat the top-tier nations.

There were no breakthrough victories in friendlies, tournaments — and not at the Women’s World Cup.

Then, Canada beat Australia to open the 2016 Olympics. And we said: “oh, the Aussies’ world ranking is overstated.”

Then, they beat Germany. And we said “Germany didn’t want to win because of the tough draw for the group-stage winner.”

Maybe now, it’s time to believe in the work coach John Herdman and the women have put into this push for the podium. A gritty 1-0 quarter-final win over France wasn’t always pretty, there were some scares, but we know this — Canada can be called not just a medal threat, but a gold-medal threat.

Four games in Brazil. Four wins. The Canadians have given up just two goals.

Enjoy this. Over the past four years, Canadians have been so filled with doubt about the direction of the women’s program. But, tonight, replay that oh-so-wonderful winning goal in your head. See Janine Beckie take a long pass and, with one deft touch, pop the ball over a French defender’s head. Remember how, with her second touch, she lofted the ball to the far post. And, think about how Sophie Schmidt fired the ball into the top of the goal with a perfect volley.

As all-time Canadian national-team goals go, this was one of the prettiest. It was artistry from Beckie, and clinical finishing from Schmidt. There was grace. There was power.

Canada got its scares in the game; the first — and most controversial — came in the ninth minute, when referee Claudia Umpierrez didn’t blow the whistle after French forward Eugenie Le Sommer was hacked down in the Canadian penalty area by Kadeisha Buchanan. The Canadian centre back didn’t get any of the ball. Had Umpierrez pointed to the spot, the Canadians couldn’t have complained.

On set pieces, the French came close two other times in the first half. But headed efforts from Griedge Mbock Bathy and Wendie Renard both missed their target.

Right before halftime, Alyssha Chapman had to come out of the game with a shoulder injury. But, having to worry about who will play left back in the semifinal is a winner’s problem — it’s a lot better than watching someone else play in the semis.

After Schmidt gave Canada the lead, there were scares. A defensive header from Christine Sinclair looped over the head of keeper Stephanie Labbe, but the ball struck the bar. A few inches later, and Canada would have been undone by an own goal.

A penalty claim that wasn’t given. A ball that goes off the bar. Maybe Canada has a giant bag of karma — built up from the controversial loss to the United States in the 2012 semifinal. Maybe the soccer gods have said, “you know, after that cheap time-count call that let the Americans tie that game in 2012, Canada should get a break or two.”

But it’s not just about luck. It’s about all-hands-on-deck defending. It’s about some wonderful off-the-ball running from Beckie — who has clearly established herself as Sinclair’s heir apparent. It’s about taking all the lessons learned from last year’s World Cup and putting them into play a year later.

After so much fretting — it’s time simply to applaud.