May 25, 2022
9 New Articles
Home MLS Toronto FC The Evil Reds: Why it’s good for MLS that TFC is just so darn despicable 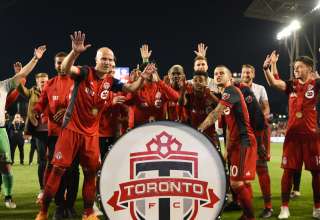 “On one hand, you feel for the small group of loyal supporters that they have and have been here since the beginning who continue to support the team and come out week after week. On the other hand, you can’t deny the fact that things here have really fallen behind in terms of the atmosphere in the stadium, the quality of the stadium, what it’s like to play here.

“I don’t know who’s at fault for that. There’s a lot going on and I get that and as an outsider I don’t know what that falls on, but again the reality is as the league has continued to grow, and this is not the only one, this is one of a few markets that has not kept pace.”

Michael Bradley is surely not going to win himself any popularity contests with that (already viral) comment, made in the wake of Toronto FC’s 0-0 Eastern Conference first leg result at Columbus.

The Crew are likely going to move to Austin and, amongst soccer supporters in North America, the cause celebre is #SaveTheCrew. We like to pretend that somehow soccer in North America wasn’t going to be like other sports leagues on this continent, where franchises move with regularity.

But this article isn’t about #SaveTheCrew. It’s about how Bradley’s comment is just another building block in Toronto FC’s reconstruction of itself not only as MLS’s best team, but it’s most despicable. This is a team that had two of its star players suspended for the first leg; this is a team that swarms referees with regularity. Before Jozy Altidore and Sebastian Giovinco saw cards in the playoff decider against the New York Red Bulls, they put their hands all over the officials as they protested cards. They have become a polarizing group; loved by their fans (who believe the world is against them) and hated by those who see them as dirty, whining complainers who fake it when they need to. Basically, they’re Arsenal of the late ‘90s.

And this is exactly what MLS needs. It needs Toronto FC to be the foil. That’s the thing with MLS. With central control of contracts, with all franchises trotted out in Adidas gear, it’s always had the feel of a bunch of branch plants playing each other. What MLS needs is a New York Yankees, a Manchester United, a New England Patriots or Dallas Cowboys, a super-team that, outside of its fan base, is absolutely loathed. Let’s face it, think of the team you dislike most in MLS. Now compare that to the team you most dislike in the Bundlesliga or La Liga or the Premiership. It’s not close, is it?

But, finally, Bradley, Giovinco, Altidore and co. are building something for MLS, something the league has needed for two decades — a collection of heels.

As well, despite Designated Players, MLS rosters still remain largely anonymous. There is still little personality to the teams. Quick, name three players on the New England Revolution. Or the Philadelphia Union. Time’s up. And you’re a soccer fan, aren’t you? Don’t worry, you’re not alone. The lack of personality in MLS makes the NHL look like a league of charisma. But, finally, FINALLY, there are players in this league who cause thousands of fans to boo at the top of their lungs (OK, most of it has to do with a failed American World Cup qualifying campaign, granted). This league needs villains as much as it needs sparkly Designated Players.

There is something special about Toronto and polarizing athletes. A couple of years ago, it was Jose Bautista’s bat flip. Now we’ve got a TFC team that comes off as the bad guys. Look, Auston Matthews, it’s up to you — to fit in you’ve got to go out and say that you hate puppies and sunny days.

Deep down, I think Canadian soccer fans know that this TFC team is kinda evil. But, heck, who would you rather be at Halloween, Darth Vader or Luke Skywalker? MLS needs it. Toronto needs it. Look, if you cheer for TFC, you know some of the things they do are hard to defend. But don’t let it gnaw at you. The “us against the world” thing is fun.

Now, go ahead and drive a muscle car down the King Street streetcar lane. You know you want to.