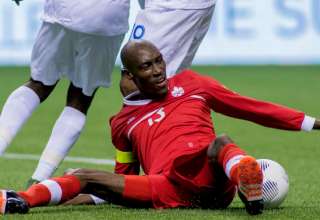 With the likes of Cyle Larin and Junior Hoilett in the ranks, the Canadian men’s national team has received an injection of new blood. But, really, this team will likely only go as far as Atiba Hutchinson, Julian de Guzman and Will Johnson can take it…

Canada hasn’t qualified for the Hex since the qualifying cycle for the 1998 World Cup, back when the team fielded the likes of Bunbury, Aunger and Peschisolido.

In that campaign, Canada finished at the bottom of the six-team “Hex,” the nickname given to the six-team group that wraps up CONCACAF qualifying. For a program that made the World Cup in 1986 and got into a winner-take-all playoff with Oceania champs Australia for a chance at USA ‘94, finishing sixth in the Hex was a setback.

Little did we know that making the Hex would go from formality to an impossible dream.

But, with a 1-0 win over Honduras at BC Place to open up the third round of CONCACAF qualifying, followed by a 0-0 draw in El Salvador, Canada now stands in second place in Group A. The top two teams in the four -team group will qualify for the Hex. Mexico’s qualification from the group is about as sure a thing as you can find in men’s international soccer, outside of a game between New Zealand and anyone else in Oceania. But, Canada is three points up on El Salvador, with the road date there out of the way. And, Honduras, the big bad wolf who beat Canada 8-1 in the previous World Cup qualifying cycle, is four points back of the boys in red.

And who will have to hold up the sky for Canada? Coach Benito Floro has brought in some youth, but the truth is the team will go as far as the veterans can take them. The thirtysomething Atiba Hutchinson, the thirtysomething Julian de Guzman and the nearly thirtysomething Will Johnson were magnificent in the win over Honduras. Johnson’s headed effort bounced off the back of striker Cyle Larin for the game’s only goal. Hutchinson calmed down play in the midfield, and de Guzman won challenges and looked like he was 10 years younger than the age shown on his birth certificate. Guzman’s scorched volley forced an outstanding save from Honduran keeper Noel Valladeres.

“I connected pretty well, but if I kind of angled it a bit more, I’m sure I would have hit the back of the net,” said de Guzman. “But, when you have chances like that going forward, you feel the confidence behind the team and we didn’t hold back at all.”

“When people ask me about these players, I always say the same. It doesn’t matter the age, what matters is the feeling, their behaviour, their condition,” said Floro after the game. Read: Those three will continue to run the Canadian midfield until they fall down.

“Atiba and Julian, they push me,” said Larin. “Just to see them work hard and to see them on the field… The things they do on the field are magnificent, so it just pushes me to keep going and fight with them.”

De Guzman thought back to August of 2008, when Canada began the third round of CONCACAF qualifying for the 2010 World Cup. They opened the group stage against Jamaica at Toronto’s BMO Field. He scored to give Canada a 1-0 lead. Everything looked good for Canada to take all three points.

That is, until Andy Williams — who, ironically, grew up in Toronto — took a corner kick for the Jamaicans. It was mishandled by Canadian keeper Pat Onstad and went across theline. Canada couldn’t find the winning goal and the qualifying campaign was derailed by a opening-game draw in a contest Canada needed to win. De Guzman compared that to the opener vs. Honduras in Vancouver.

“I’ve been waiting for this for years,” he said. “I remember 2008, at home against Jamaica. We were in the lead, it was an important match for us, and they ended up tying it. The rest was history. And, go back to 2012, we ended up against tying against Honduras at home. We dominated that game and couldn’t come out with the win that we needed. And that affected the result for us [8-1] and the end of everything. So, this win was very special. I think a lot of the guys… it was a different feeling we had going into this game. We felt a lot more confident. We had the right players involved. Everyone finally believed in us.”

But, Canadians have seen hopeful World Cup qualifying campaigns ground into dust. And, unless the Canadian team can come up with a major upset in the two games against Mexico in March, we’ll expect either El Salvador or Honduras to make up ground in the standings. We’ll curse the fact that Canada was, ahem, only able to earn a 0-0 draw on the road to El Salvador, getting just one point when, well, in perfect world, the boys in red could have had three.

But, remember, this was a program that, in the last qualifying cycle, couldn’t compete when it went to Central America. A single point against a young El Salvador team was a positive result, even if some of the El Salvadoran veterans weren’t playing because of a dispute with their national football federation.

Back to BC Place

And, Canada, in its attempt to even steal a point from Mexico, will play again on the turf at BC Place. The two teams are set to play March 25 in Canada, then March 29 at Mexico.

Floro all but confirmed a Vancouver return minutes after the Canadian team beat Honduras in front of 20,000-plus boisterous supporters. And, he compared that to what he considered a disappointing turnout in Toronto for the Gold Cup match against Costa Rica this past summer.

“We like it a lot. We felt that support, always, is helping the team from the first moment, in each moment, in the difficult moments. For me, there are two years with a lot of games away, and when we play two official games in Toronto, one day we have lots of rain, it’s difficult, and no more than 18,000 people (the official attendance for the Gold Cup match against Costa Rica was 16,674)… I am sure we are going to play against Mexico here (in Vancouver).”

“Crowd was great, largest I’ve been a part of with the Canada team,” said Johnson.

“We had a great turnout, it was electric. It’s something we’re looking forward to in the future with this success behind us,” said de Guzman.

Just as it did with Honduras, look for the Canadian Soccer Association to call for the BC Place roof to be open, no matter the weather. Look for Canada to squeeze whatever advantage it can. Look for a Canadian team that, in the future, may prefer to play on turf at home than on grass — at least in the official games.

But are the demons of 8-1 still present?

“I don’t think we’ll ever forget it, but I’m definitely past it,” said Johnson. “It doesn’t matter to me anymore. In this game you have ups you have downs… for me, the score in that game didn’t matter to me as much as the opportunity to go to the hex that we missed. It probably would have been more painful had it been 0-0 in the 95th minute and we lose by one.”