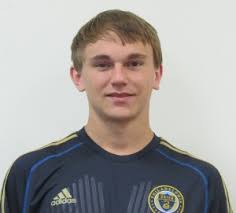 Canadian U-17 national-team coach Sean Fleming will begin working Friday with 24 players who hope to stick with the squad when it leaves for the United Arab Emirates in October.

Canada qualified for the U-17 World Cup earlier this year. But Fleming has added five new faces to the roster for this pre-World Cup camp, which runs Aug. 2-12 in Sunrise, Fla. Two of them are surprising, to say the least.

Sticking out like sore thumbs on the roster are FC Dallas academy defender Eric Davies and Philadelphia Union Academy forward Matt Greer. Both play for American clubs. Neither were part of the Canadian team at CONCACAF qualifying.

Greer is an American national merit scholar and is committed to Dartmouth. He goes to Unionville High School, located in Kennett Square, Penn. He scored for the Union Academy in the Generation Adidas tournament semifinal against Chivas USA last year. He also plays for the elite Penn Fusion side. According to his Penn Fusion bio page, he lives in Chadds Ford, Penn. He spent three years in the U.S. National Training Centre — which suggests that he was at least on the radar of the U.S. national program.

UPDATE: Greer responded to a query from The 11 via e-mail: “My family has had a history in Canada. Both sides of my family had lived in Manitoba for a couple generations including both of my parents who grew up there. I still have lots of family up there, so Canada seemed like the right decision. All my paperwork is also complete to my knowledge including my Canadian passport.”

Davies was part of the FC Dallas Academy program that went on a spring tour of Poland, which included a game against the youth team of Lech Poznan. Davies was born in the United States and is with FC Dallas’s under-15 pre-academy squad.

According to the FC Dallas website, “Davies, who will become an integral part of the FCD Under-16 USSDA squad next season, has a Canadian father and will be appearing in the Canada youth side for the first time.” FC Dallas later confirmed to The 11 that Davies is a dual citizen.

When I last spoke to Fleming, who can often be found at FC Edmonton matches or at the team’s training session, he mentioned that his players understood that, even though they qualified for the World Cup, that changes could be made to strengthen the squad. And it’s clear that search didn’t end at the Canada-U.S. border.

(Thanks to Dave Rowaan from Waking the Red for aiding in the search on information on Davies).
CANADA ROSTER