September 24, 2022
9 New Articles
Home MLS Toronto FC TFC’s need for a centre back is evident in loss to Houston 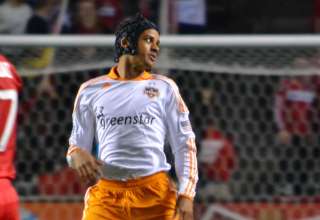 Toronto FC’s three-game winning streak ended with a thud on Saturday as the Reds turned in arguably their worst effort of the Paul Mariner era in a 2-0 loss to the Houston Dynamo at BMO Field.

In an evenly-matched first half, all it took was one mistake to break things open and, unfortunately for TFC, that mistake took the familiar form of poor set-piece defence.  Just moments before halftime, Brad Davis’s corner was tipped by Bobby Boswell on the left side over to a wide-open Calen Carr on the right, who had plenty of space to head the ball past goalkeeper Milos Kocic.

“It’s a terrible goal to concede, especially at that time,” said head coach Mariner.  “That’s when you really should be on your mettle since you know it’s the last kick of the half and you’ve got to be resolute.  If you flip the coin and look at Houston’s defending of set pieces, it was exemplary.”

The goal underscored TFC’s need for an experienced centre back and, while this has been a season-long (and beyond) weak point for the Reds and the MLS transfer window is closing fast, Mariner said he hadn’t made any acquisitions because he was looking for a permanent solution.

“I could’ve brought scores of players in but they’re not the right player,” Mariner said.  “What’s the point in having a panic buy?  We’re in it for the long haul, we’re not in it for 10 minutes.  I’m hopeful that we get something done over the weekend.”

Carr’s goal was all that Houston needed on a day when TFC’s attack was next to non-existent.  The Reds managed just two shots on goal and eight shots total in the match.  The strike force of Ryan Johnson and newly-acquired forward Quincy Amarikwa (playing his first official game for Toronto) failed to generate much of anything in way of scoring chances, though the two received little in the way of service from the midfield.

“We were too predictable going forward today,” said Johnson.  “The general play had to be better….I thought there wasn’t enough fight on our part.  We made it too easy for Houston today.

“The fight wasn’t there and that’s the number one thing we have to bring….Houston’s a very good team.  If you don’t bring the effort you’re not going to beat them.”

The Reds’ best chance came in the 31st minute, when Doneil Henry used his head to redirect a Torsten Frings corner kick and forced a decent save from Dynamo keeper Tally Hall.  Rookie Luis Silva had another good opportunity in the 72nd minute on a header attempt in front of Houston’s net that went wide.

Though their offensive push was for naught, the Reds threw everything ahead in the closing minutes to try for an equalizer, leaving them with just three men in the back and vulnerable for the Dynamo’s second goal.  Brian Davis drew two defenders on the left side and then sent a superb pass to Brian Ching in front, who converted to ice the game for Houston.

The scoreline obscured a fairly decent effort from the Toronto back line, who did well to keep the Dynamo forwards in check for much of the game.  Will Bruin, Houston’s leading scorer, didn’t dress for the match but it’s a testament to the Dynamo’s striking depth that the club didn’t appear to need him.

Saturday’s result was just TFC’s third loss in 11 games under Mariner and it ensures that the Reds will remain at the bottom of the overall league table with 19 points.  Portland also has 19 points heading into their Saturday night date with Chivas USA.

After a gruelling stretch of 10 league games in 33 days that ended on July 18, the Reds played Liverpool in a friendly last weekend and then enjoyed their first full week off in over a month.  The extra rest seemed to leave TFC sluggish, so it is perhaps a good thing that the team will be back in action quickly on Wednesday, hosting Salvadoran side Aguila in the opener of the CONCACAF Champions League group stage.

It’s a game the Reds can’t afford to lose, as they will need maximum points against Aguila to have any hope of advancement, given the presence of North American powers Santos Laguna in the group.

“It’s great when you have a midweek game after a poor performance.  We can put it right on Wednesday,” said midfielder Terry Dunfield.  “We still believe in ourselves and there’s a lot to play for this year.”

New TFC striker Eric Hassli was present at BMO Field on Saturday, though only to be introduced to the media before the game.  The forward was acquired in a trade with the Vancouver Whitecaps on July 20 though isn’t yet fit to play due to an ankle injury.