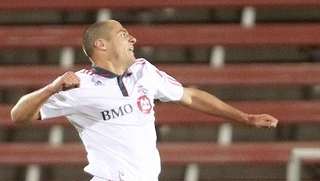 De Rosario’s goals in the first and 43rd minute of the first half, and a goal by D.C. forward Hamdi Salihi, consigned Toronto to its ninth straight league defeat of the season. Danny Koevermans scored the consolation tally for Toronto.

“It’s not good when you lose 3-1,” head coach Aron Winter said after the game. “I think again we have given away very easy goals, the first, second and also the third.”

Winter named an unchanged starting XI from Wednesday’s 1-1 draw against Vancouver Whitecaps in the Voyageurs Cup match. But things couldn’t have started worse for TFC, as it found itself down a goal in the game’s first minute.

De Rosario found the back of the net off a Branko Boskovic free kick, as the unmarked midfielder headed past a Milos Kocic to put the home side up 1-0.

“With a set piece everyone knows they are responsible for their own man and Dwayne was completely alone,” Winter said. “He was not marked and then you are asking for problems.”

After the early goal, Toronto settled into the game and began to challenge D.C. Reggie Lambe had a close look at goal, getting in behind the United back line, but his touch let him down and Bill Hamid was quick to snatch it off Lambe’s foot.

And while the chances were there for Toronto to equalize, Johnson wasted a few half-decent looks at goal, failing to truly test Hamid in the first half.

United then punished Toronto for their misses with De Rosario’s second of the night. In the 43rd minute, Josh Wolff found himself in space near the top of Toronto’s box. He picked out defender Chris Korb, whose perfect centring pass found De Rosario at the far post to extend the lead to 2-0.

Before the break, midfielder Terry Dunfield missed a glorious chance to cut the lead in half. A bouncing ball found him in the middle of D.C.’s box, but his shot was just wide of Hamid’s post.

Despite being down a pair of goals, Toronto came out the better side in the second half. Looking to get itself back in the game, Koevermans entered as a halftime sub.

He changed the complexion of the game in the 71st minute, finding the back of the net off of a Julian de Guzman free kick.

However, Hamdi Salihi’s sliding finished restored the lead just two minutes later as the Reds back line couldn’t hold the lead once again.

“It’s a letdown,” defender Adrian Cann said. “We’ve got them closed up in the corner, the key gets to slip through, hits the ball across and there are two guys back post. They’re hungry, they’re there to pop it in. It’s disappointing.”

Despite a bevy of chances following D.C.’s third goal, Toronto couldn’t find a way back into the game, and with the loss extended their losing streak in MLS to nine games.

A clearly frustrated Koevermans vented after the game.

“We have nothing,” he said. “We’re just the worst team in the world at the moment, and our hope only we can get a point or win in the league. I’ve already said the words frustrating, horrible, horrendous, atrocious. It’s done.”

And with the all-important Voyageurs Cup against Vancouver quickly approaching, Cann knows things must improve.

“There’s no other choice,” he said. “We’re either hungry, we win the championship, or we play like we did today and come away with nothing.”