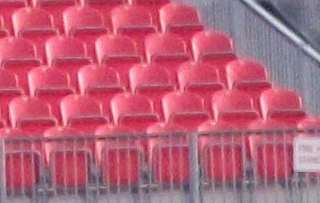 Toronto FC’s home schedule ended not with a bang of another last-second concession but rather the whimper of a fairly rote 0-0 draw with the Montreal Impact. It was the indifference that might be the most worrying thing for the Reds as they finish their sixth straight year out of the playoffs — out of the announced 16,151 in attendance at BMO Field, the majority of the noise seemed to be coming from the 150-odd Impact fans in the visitors’ section.

As far as the Impact is concerned, the erosion of support for TFC in its home city is a cautionary tale.

“You know these Canadian cities are tough with teams except for hockey, where you have a century of tradition,” said Impact midfielder Patrice Bernier. “You have to win to make sure the people keep coming. This first year has been good since we’ve been very solid at home and I think the people are proud of that and proud of the season we’ve had. We have to make sure we have the same kind of season and even better next year to keep it going.”

Montreal’s first season as a Major League Soccer franchise has been a respectable one, with the Impact sitting with 42 points and a 12-15-6 record heading into its season finale against New England next weekend. The 12 wins and 42 points, for the record, are already more than TFC has ever achieved over six years of existence.

If anything, there’s disappointment that things didn’t work out even better for the Impact given its late-season struggles (Saturday’s draw extended a winless streak to five games) and its ongoing rivalry with Toronto FC.

The Impact finished the season with an even 1-1-1 record against TFC, and Montreal’s postseason hopes could still be alive had the club not dropped five points to the last-place Reds.

“No matter where we are in the standings, these games are always tough. Every time we’ve played Toronto it hasn’t been an easy game,” Bernier said. “Both teams gave a lot physically… I think we had clear-cut better chances in terms of scoring and I think a lack of finishing did it on our part.”

The Impact had the better run of play in the opening minutes, with Andrew Wenger’s close call in the 13th minute standing out as the best chance. Wenger took a through ball into the box and while defender Logan Emory was in position, Wenger still fired the ball past goalkeeper Freddy Hall, who’d strayed out in an attempt to cut off the play. Wenger’s shot, however, went just wide of the right post.

As in any scoreless draw, the key moment may have been something that didn’t occur. In the 18th minute, Montreal defender Hassoun Camara took an aggressive, spikes-first slide right into the shin of TFC’s Luis Silva that could’ve easily been a straight red card. Instead, no caution of any kind was delivered by referee Jose Carlos Rivero. he lack of discipline cost Toronto an early chance to get an extra man, or it could’ve gotten an advantage in the 73rd minute when Camara did get booked for a tackle on striker Eric Hassli.

Hassli was one of three changes to the TFC lineup, as the forward returned from an ankle injury to fill the void left up front by the suspended Ryan Johnson and the injured Quincy Amarikwa. Hall replaced Milos Kocic at goalkeeper while Ashtone Morgan returned from his battle with an ongoing chest cold to replace Darren O’Dea on the back line, as O’Dea picked up a thigh injury on international duty with Ireland last week.

The only change to the Impact’s Starting XI was Collen Warner joining the squad, with captain Davy Arnaud moving to the back line in place of Alessandro Nesta. The benching is the latest indignity for the underachieving Nesta, who was substituted early in each of his last two games.

While the lineup remained largely intact, the biggest change for Montreal was on the bench, as assistant coach Mike Sorber was in charge of the game. Head coach Jesse Marsch was serving a one-game suspension following his ejection from Montreal’s last game, on Oct. 6 against Houston.

TFC created some solid pressure of ots own and deserved at least a point from the match, though its propensity for late failures nearly hurt it again, as the back line seemed to break down the moment the clock hit the 90-minute mark.

Of the Impact’s 17 shots in the match, five came in stoppage time. Marco Di Vaio had probably the best chance on a close-range shot that was blocked by Reds centre back Richard Eckersley, though the forward also had a wide-open opportunity go left in the closing seconds and Warner had a high shot that required a jumping save from Hall.

“It has been our problem all season,” said Eckersley. “That last five to ten minutes of the game we start to lose our shape and we start to cause silly mistakes because of fatigue or whatever it may be. We just need to keep focused and these are things we have to learn for next season.”

While Reds head coach Paul Mariner was pleased with the clean sheet and how TFC avoided “the 90-minute jitters,” he felt the single point was another example of how his team has “never ever seemed to get a break” over its current 13-game (0-8-5) winless streak, which ties a club record.

“What that does to young players is it chips away at their confidence. Their confidence is at a low ebb,” Mariner said. “We try our level best to keep it bright, keep it jolly, but it just chips away.

“The only result I’m really upset about was [the 3-0 loss to Philadelphia on July 8]. I thought we were terrible against Philly but other than that we’ve been in everything.”

Next up for TFC is its longshot of a Champions League group stage game against Santos Laguna on Wednesday in Torreon, a match that Toronto will have to win by at least two or three goals in order to advance in the competition. Emory and Hassli will both not make the trip to Mexico; Emory left after 30 minutes on Saturday with a reoccurrence of his nagging shoulder injury, while Hassli’s wife is scheduled to give birth via a C-section on Monday.

Beyond that game and its last MLS game on Sunday in Columbus, who knows what yet another tumultuous offseason will bring for the hapless Reds? Perhaps all we know is that another coaching change isn’t imminent, as Mariner seemed confident that he would be retained for 2013.

“There’s nobody more depressed than me [about TFC’s results],” Mariner said. “But I can’t wait for next season, I can’t wait until January 19 when we get together [for training camp].”

That makes at least one person in Toronto. One can recall the outrage amongst the supporters’ community during the last “rock bottom” moment for TFC, when MLSE planned to raise ticket prices despite another postseason-less season from the Reds in 2010 and the end of the Mo Johnston era. The fans still had enough passion to care then, but after two more years of poor football, the increasing numbers of empty seats at BMO Field indicate that apathy is taking over.

(TFC has just issued an offer to season-ticket holders, allowing them to renew at the 2007 price, which means significant cuts in ticket prices in order to preserve the subscriber base.)